There are six domains of tactical profiling that enable us to quickly identify intent, abnormal behavior, and threats. Heuristics is the primary domain made up of a core of five other domains being; Proxemics, Geographics, Atmospherics, Kinesics, and Biometrics. These six can be analyzed as a cohesive profiling checklist used to predict human behavior. They must be simple enough to be both predictive at a glance and complex enough to be studied over a period of surveillance operations to provide a more definitive conclusion to future intent and behavior. In a chaotic atmosphere, our analysis and decision making ability will be stressed. For this reason the observations must be deconstructed to understand a broad set of behavior. 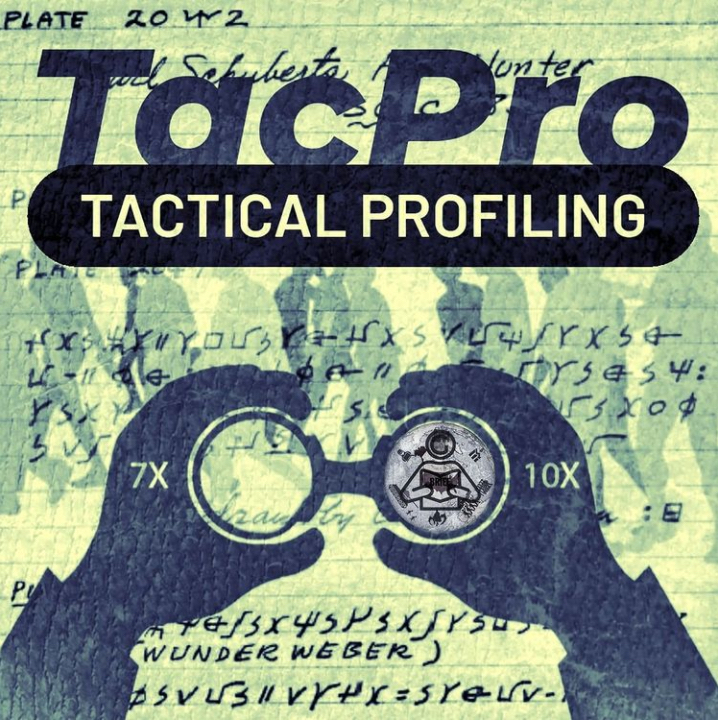 While some conclusions can be assumed at face value, to get a clear prediction, you’ll need to establish a baseline. Within each domain, normalcy exists. Our end goal is to determine anomalies. Behaviors or actions that deviate from the norm should be what causes us concern. Anomalies foretell threats. We profile others to gain insight into their intent and aptitude for causing harm.

Scenario: At LabTech LLC, on the 4th floor a group of people wait in line at a coffee kiosk. A woman in a dress suit pays for her coffee with a debit card. A man in a lab jacket stands nearby then paces around near the front of the line. He leaves and bends down to tie his shoe by the elevator. He stands up abruptly as the lady with coffee goes to press the elevator call button. This caused her to spill her coffee and drop her purse. The man helps her pick up the scattered belongings and then offers to pay for coffee. She accepts the two part ways. A crime has occurred. Situational awareness and profiling the 6 domains will allow you to detect the unknown crime and preemptively intervene.

Let’s apply these domains to profiling behavior. Each domain should be simple to understand. Operating Environments (OE) are complex and nonlinear. Overthinking the domains would hinder the profiler’s ability to interpret behavior and react. In short; 1. Observe each domain simultaneously if possible. 2. Analyze, assign a presumed baseline by comparing their observabilities to others (or the accepted norm). 3. Analyze, identify deviant behaviors (anomalies). 4. Determine threat level. 5. React.

》Heuristics: Is a separate domain that utilizes the data collected by the core 5. It enables expedient identification and decision making on a chaotic and ambiguous OE. This is your domain. This is how a person rapidly assigns labels then interprets them based on preconceived and prototypical knowledge gained in the core domains. It uses our personal understanding to make assumptions. A simple example is seeing someone pull an object from their pocket, touch it a few times, then up to their ear and begin to talk. It is reasonable to assume the object is a phone. This assumption is a heuristic.

》Kinesics: This is the simple study of body language and what it reveals about people. This is a non-verbal series of visible manipulation of the body that includes pursed lips, crossed arms, furrowed brows, gaits, body posture, bobbing of the head, “staring through,” and gestures. Incorporate the understanding of Gestures which include adaptors (indicate internal states such as arousal or anxiety), emblems (used for agreed upon signs such as hitchhiking with a thumbs up or ASL), and illustrators (spreading hands to show length of a caught fish.)

》Biometric Cues: These are involuntary physical reactions caused by stimuli and other factors. It includes bodily movements such as “jumping” at the sound of a bang, blinking, sneezing, dilated pupils, sweating, etc. It’s important to reconnect forced non-reactions as well. A bystander’s nonchalant reaction to a “vehicle versus pedestrian” crash would be important to consider in your behavioral analysis.

》Proxemics: This is the study of interpersonal relationships and the interactions with other people. Consider how others walk against the flow of foot traffic, or how they group around a certain person. This can help you determine anomalies and relationships. If a group is facing a single person perhaps that is a key figure (such as a leader). If a woman stands close to a man, when not forced to by space constraints, this could signal an intimate relationship or conversely it could indicate sound is high in the area and close proximity is needed to converse.

》Geographics: The study of the relationship with a person’s operational environment (OE). This will help us identify areas of interest. Watch for alleyways that others avoid, spaces that others collect around while appearing relaxed, or natural lines of drift (NLD). Some peoples NLD show a smooth unimpeded travel while others travel the same patch but seem slowed by an unexpected pothole or a door that needs to be pulled versus pushed. This lets us know who’s familiar with the space and who might be a visitor. We can learn habitual areas (safe zones where people loiter, sleep, eat) and anchor points (areas for interest that may be limited to select persons such as an employee entrance or a drug house).

》Atmospherics: This is the analysis of the collective assumed attitude an area generates onto those it encompasses. A sports arena will be well lit, with music, cheering, and excitement. A funeral may be quiet, with brown painted walls, with little natural light. The atmosphere creates the intended baseline behavior. By knowing the intentional design of an OE we can detect anomalies in behavior.

In our example scenario we could apply the analysis of the 5 domains to determine the following; The man is the only one in the area wearing a lab coat. He is out of place. He’s not in line but yet he hovers near the counter. He’s looking down and not up at the menu. He’s looking towards the credit card machine. He’s eavesdropping to collect the pin code entered by the lady. His index-finger is making subconscious micro movements, drawing the 4 numbers out, as he copies them in his head. His shoe was already tied. He’s setting up a “bump” IOT knock the purse and use “sleight of hand” to collect the debit card. He keeps his head down and pretends to scratch his face while offering to pay for her coffee. He’s hiding his identity. Somewhere during his incident, enough indicators would have presented themselves enabling you to deter or react IOT stop the victim from having a card stolen.

Practice Tactical Profiling anytime you’re in a public place. Use it for trivial situations then do a “check on learning” to determine if your skills are working.

*These concepts are taught in the “USMC Basic Officer Course and are covered the “Profiling and Tactical Tracking lesson plan” and the “USMC Combat Hunter Program”.

17 Steps to Prepare for a Life Altering Event (LAE)