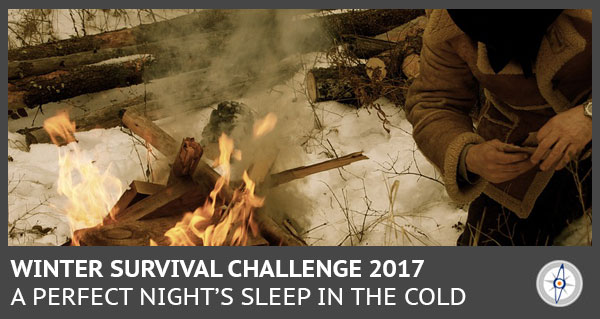 On my first winter survival challenge, I made a huge mistake in time management. I went into the challenge planning a large, elaborate shelter. The daytime temperatures were in the 20s with heavy snow coming down. I set out at dawn and started gathering materials for my shelter. The plan was to make a dome shelter with a debris hut attached for sleeping.

This would give me a protected area to sit by the fire, and give me an insulated smaller area to sleep inside. I bit off way more than I could chew. I had no problem framing out the shelter, but insulating it was taking a long time. Maple poles made up most of the frame, and I used cedar boughs for insulation. Time went by quickly, and soon I was only an hour away from dark.

I scrambled to find materials to build a fire and pulled out my ferro rod. Unfortunately, the snow and rain from the last few days left everything damp. I tried and tried to get my fire going only to watch the sun dip behind the horizon. 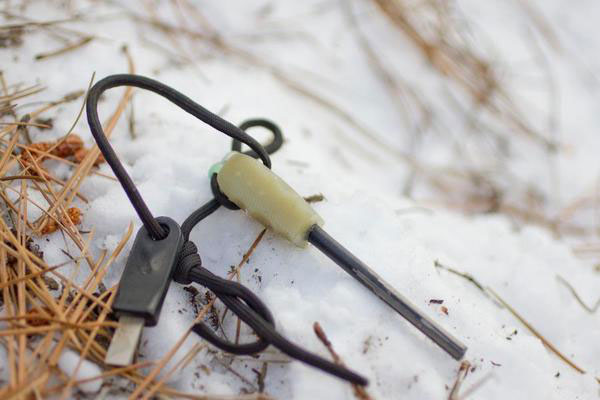 I quickly realized that it was going to be a long, cold night. The 20 mph winds whipped through my shelter like the walls were not even there. As the temperature dipped down to -1°F, I pulled out my emergency blanket to try to slow down my shivering. It did not help much. I got up several times to get water from the pond and get some exercise to keep my blood flowing. Squats and jumping jacks work well with that, but still I shivered and my hands and feet hurt badly.

Most survival experts will tap out at a body temperature of 96.3°F. This is because your judgement can start to become impaired if it drops below that point. Mine was approaching this mark. I noticed my hands and feet were now going numb. I became nauseous and confused. While walking to get water, I forgot where I was going despite a clear path in the snow. I decided to tap out around 1am and head to safety.

The following weekend I successfully completed the challenge with similar weather conditions. This time my shelter was smaller and simpler, so I had time to get a fire going. I also used birch bark to help start the fire because of the flammable chemical inside that lights even when wet. I spent the entire night lying so close the fire that my stocking cap melted. Despite all of this, my hands were numb and tingling for two weeks after the challenge. 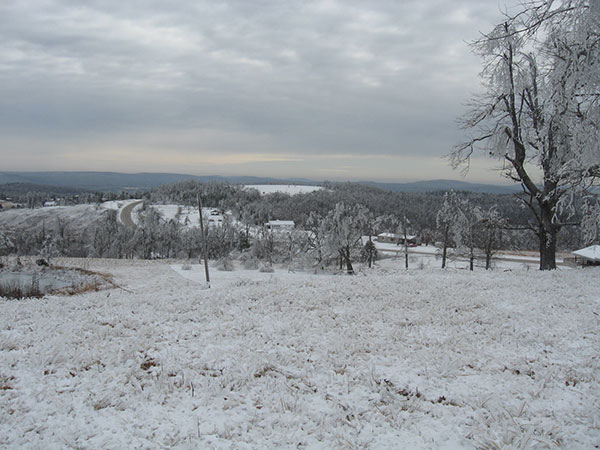 On my second winter in the wild, I headed to my uncle’s property in the Ozark Mountains. He owns about 750 acres in an area that has thick woods, tall bluffs, dangerous sinkholes, and caves. Again, I picked the coldest weekend of the year. On this challenge, I had to hike several miles to find a good water source before making camp.

My plan was to try out a design for a super shelter. This type of shelter uses reflection and radiation principles to trap heat from your fire inside your shelter. The design involves a lean-to with an emergency blanket attached inside the roof to reflect heat. The whole thing is then covered in clear plastic. The heat passes through the plastic and then bounces off of the reflective surface of the blanket onto your bed.

I was able to find a holler that was surrounded by bluffs on three sides. This would help cut down on the wind, and there was a spring nearby. I started working on my shelter immediately. Once it was framed out, I worked on the bed. I felt it was vital to get off of the ground this time. I built a frame and added slats. After filling it with leaves, I then piled leaves on top. I had brought three deer hides with me, and laid them down for padding and insulation. Then I added the emergency blanket and the clear plastic. There was plenty of wood close by for my fire, so I decided to build a body length fire. I laid down several logs about eight feet long and built two teepee fires on top. Using my ferro rod, I got them both lit. Over the night they burned down to the logs and kept a long fire going all night. 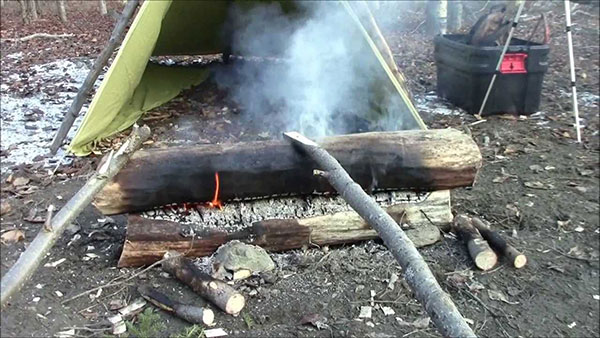 The shelter design worked incredibly well when the fire was going. However, because of the lack of insulation the shelter dropped in temperature whenever the fire died down. When I first got inside the shelter, it was actually so hot that I started sweating. I had to adjust my clothing so I was more comfortable. It must have been at least 80°F inside. I was able to fall asleep comfortably, which is hard to do in a survival scenario. However, when I woke up two hours later it must have been 40°F in the shelter. I could see my breath, and knew I needed to add wood to the fire. I had to play this game all night, but was able to get a little sleep and survive the challenge.

This year I wanted to try something completely different. In previous challenges, I was forced to rely on my fire to survive. This meant that I was forced to feed wood to the fire all night, so sleep was difficult. Sleep in any survival situation is vital. Without sleep I get weak, shaky, and confused.

There have been times that I went several days without sleep and started to see and hear things that were not there. I once had an entire conversation with my son, when in reality he was asleep in his bed. I also know that my blood pressure spikes after going a few days without sleep. I wanted to find a way to actually get a good night’s sleep while surviving.

I saw a video almost a year ago in which a guy was saying that you would not need a fire if you use three simple items. This was a sleeping mat, a sleeping bag, and an emergency blanket. While skeptical, I wanted to try it out. If there was any way to stay warm enough to sleep without a fire, I was in.

As with previous challenges, I picked the coldest night of the year. This was in December, so the temperature was dipping down to 16°F with winds whipping at 14mph. It had rained a few days before, and I would be lying in a low spot. I decided to also lay down a tarp to ensure that I did not get wet. On top of the tarp I inflated my sleeping mat.

Mine is both insulated and inflatable to get me off of the ground and keep me warm. Staying off of the ground is vital to warmth as the ground will suck heat right out of your body. Next, I put down my sleeping bag. It is rated to -20°F, but I had never really tested it out in cold weather. Finally, I laid down my emergency blanket with the reflective side facing in. This would reflect 90% of my body heat back to me in theory. I had to stake down three of the corners to keep the wind from carrying the blanket away. 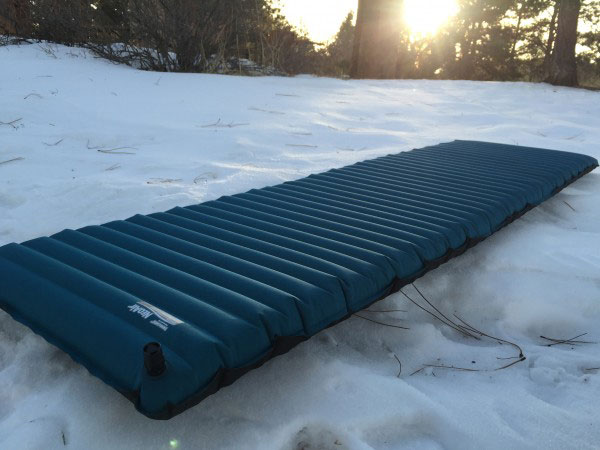 I waited for the sun to go down and headed out into the cold. I had some serious doubt about making it through the night, but we were going to give it our best shot. In this case, I took off my boots and only wore a base layer along with a warm hat. The theory behind this method of staying warm is that you want your body heat to escape into the sleeping bag so your whole body stays warm and not just your core.

Wearing several layers would defeat the purpose. As I slid into the sleeping bag, I found it to be very comfortable. Unfortunately, the zipper on my bag came off of it’s track, and it was too dark to fix it. This left my back side a bit cold, but it was still tolerable. I quickly fell asleep and woke up with the sun.

I am absolutely sold on this method of staying warm. Never have I been so comfortable in cold weather. Even with the zipper issue, there was no shivering and no feeding wood to the fire every hour. I can tell you that I plan to use this method as often as possible, and I suggest you try it yourself.

Your post about using fire makes sense. The fire may get you toasty, but it won’t keep you toasty. How did you deal with the smoke?

My other question is about the emergency blanket; I have several of them, but have never had to use them. Do you bring it in the sleeping bag with you, or lay it on the ground? Or, in between your sleeping mat and your sleeping bag?

I am one of those crazy people who like the cold weather. Today is a high of 11 F and will get down to below zero; I’ve always wanted to try this. You’ve got some great suggestions, and I have a couple ideas of my own.

Thanks for your post. I found it to be useful — keep them coming!