Using an Abandoned Building for Shelter

Shelter is one of the most vital priorities in a survival scenario. In fact, in many cases it should be your top priority. If you’re wet or it’s cold outside, you can die from exposure in as little as a few hours. Hypothermia is actually the number one reason for death in survival situations. Of course, every survival shelter situation is a little different. There are times you might be in the wilderness and be forced to build a shelter. There are other times you might be in an urban scenario in which there are plenty of existing shelters to use. In this article, we will cover the reasons why you might want to consider an abandoned building for survival along with the best process for entering and setting up your shelter.

Why an Abandoned Building?

In addition, the conditions inside an abandoned building can be sketchy. If there has been flooding or issues with air quality, you could end up getting very sick in certain abandoned buildings. These structures can be fire traps without basic firefighting services, so you should always be sure no surrounding buildings are burning. You also don’t know how strong the structure itself will be. Try to avoid stairs or elevators if possible. Be sure the building is structurally sound before you set up camp.

However, there are a few simple advantages to staying in an abandoned building. While you are more likely to have company in an existing structure, you typically have walls all around to help defend that structure. In some cases, you might even be able to get to a high point and defend the structure from above. The obvious advantage is that you get out of the weather. Most structures will block the majority of the wind and rain. Even dilapidated structures will have some level of insulation from the cold. Structures are the most likely place to find supplies like food, water, and weapons. You never know when you might stumble upon a home that was abandoned in a hurry. You might even get to sleep on a mattress or find some clean clothes.

Abandoned buildings can sometimes provide protection from contaminated water and air. This comes in handy if there are gasses floating around or flood water in the area. Obviously having a roof over your head will help protect from the sun. Finally, the most helpful aspect of using an abandoned building for shelter is that the structure is already there. In most other cases you would be forced to build a shelter. In this case, the majority of the work is already done for you.

Which Building to Pick

Anytime you pick a site for a shelter, I suggest considering more than one option. Sleeping in an abandoned building might be the best call, but you might find other sites that are every bit as good. If you have more than one building to consider, don’t ever just take the first one that comes along. Scope them all out from a distance and then check it out one at a time. If you want to avoid conflict, announce yourself from a distance as you approach each building. Be sure that anybody in the area knows you mean no harm. I find it best to move on to empty buildings and leave the occupied ones alone. You might find a good Samaritan, but you also might find a group that wants to steal your supplies.

Ideally you want to find a one-story building that is out in the open. These are the easiest buildings to defend. They are typically more solid than complex structures. Having a buffer zone between the building and the others will allow you to see threats before they’re on your doorstep. Of course, buildings with operational doors and windows are ideal. Bars on the windows are also a good thing. Instead of immediately doing a full sweep of each building, take a quick view inside a door or window then go to the next building until you make a decision. Then you can move on to a full sweep of the building that you chose. 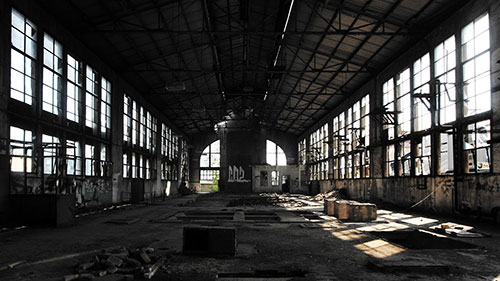 Other considerations for your abandoned building would be traffic and proximity to specific businesses. I always prefer to have my shelter clear of any major traffic routes. This means that Main street in the middle of downtown is probably not a good idea. In addition, there are certain types of building that are prone to attack. This includes electronics stores, liquor shops, gun shops, grocery stores, gas stations, and government buildings. Try to be sure you are at least a block or two away from these types of buildings.

After choosing a target building, be careful as you enter. There could be other people or animals in the building that would act violently if surprised. There might also be hazards that could injure you or other people in your party. Walk slowly and have weapons drawn if possible. If other people are with you, have them cover as you move into each room. Check any potential hazards such as broken glass, electrical hazards, fire hazards, and damaged parts of the structure. Also check closets and other hiding spaces to ensure nobody sneaks up on you.

Start with the front of the main level of the house then move to other floors. Be especially careful if there is a basement or if you decide to go upstairs. The whole house needs to be swept, but only send two people up or down stairs to avoid excess weight. Then once the whole house is swept, everybody needs to stay on the main level at all times. Since you are checking every room, have somebody gathering supplies as they move through the house. Supplies should all be brought to the main level for inventory after the complete sweep is finished.

Once you’re done sweeping every room in the building, it’s time to secure the building and get organized. One of the keys to this process is setting a perimeter. First you want the building itself to be difficult to enter. Lock doors and windows wherever possible. Use boards or furniture to block off broken windows and doors so they aren’t easy to enter. You also want to set up an early warning system for the building. In most cases, it’s easiest to set up a tripwire system across any windows or doors that could be entered. Simply run wire, cordage, or fishing line across the opening then attach a can or jar with a few small stones. This should create noise when somebody tries to enter. You can accomplish the same thing with firecrackers, bells, air horns, or electronic alert sensors.

The best-case scenario for keeping everybody safe is to pick one room that is small, near an exit, and can be completely sealed off. A single entrance into the room means you only have a single entrance to defend against intruders. It also means that the exit is easy to find if you must get out quickly. This should be a room that is well insulated, but also has a way to ventilate if needed. Use blankets or other insulation around doors and windows to keep the room warm at night. Move furniture into the room so that people have a comfortable place to sleep if possible. Also move all supplies into this room in a specific location so you can keep an eye on everything.

If you don’t have water with you, there are a few places to check in the building. Water heaters and toilets often have water that can be purified for drinking. If the water lines are down, you might still have some water left in the pipes. Outside of these options, you may have to scout other buildings for water. Obviously check pantries in residential homes for food, but you may find food in commercial buildings as well. Check desk drawers in offices for snacks or look for vending machines. Also check to see if there is a break room where people may have stored snacks.

While fire is important for many different aspect of survival, carefully consider if you want to have a fire inside an abandoned building. If there is a fireplace or wood stove, that makes the decision much easier. These are designed to draw carbon monoxide out of the house while safely heating at least that particular room. If you have wood for a fire and a way to start it, this could be a safe option. Just be sure to smell for natural gas first. 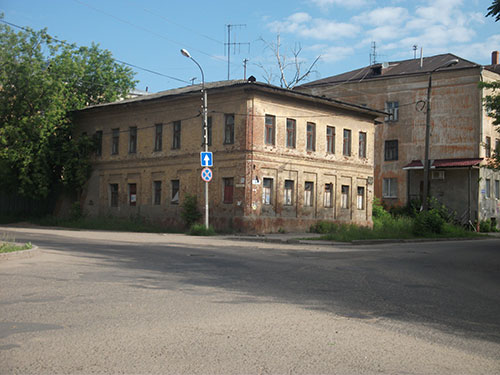 However, even if it is freezing outside you may want to avoid building a fire randomly within the building. In addition to gas leaks, there can be several other materials in abandoned buildings that are flammable. If you do build a fire, try to make it near a window or door for ventilation. Carbon monoxide can build up and silently kill everybody in their sleep. Keep water close by to douse the fire if it gets out of hand. It’s best to build the fire inside a metal container such as a cooking pot, metal desk drawer, or wheel barrow. You’ll just need to be certain that everybody is careful around the fire and around flammable materials.

Another piece of this process to consider is having somebody stand guard, especially at night. In a perfect world, there would be somebody on the roof watching the perimeter while you also have somebody inside tending the fire. Both should be considered priorities as it only takes a few minutes for a mob to gather or for a fire to get out of control. Sit down with everybody in your group and decide which shifts each person can take. Also determine what weapons are available for those watching the perimeter. Those that are sleeping will sleep much better knowing that somebody is standing guard and watching the fire. If you have a dog with you, it can help with guard duty as well. Just tie it in a good spot where you can hear the barking.

Have a Plan of Escape

Unfortunately, no shelter is permanent in a survival scenario. You might stay in this building for one night or for several months. It just depends on your supplies, the quality of the building, and if any other threats come along. Once your camp is established, you should discuss a plan of escape with the whole group. Everybody should know where all of the exits are so they can grab their gear and go quickly. Also have a rendezvous point outside of the building in case you get separated in the scramble. This should be far enough that it’s safe, but not so far that it takes hours to get there on foot. A few blocks is normally ideal. If you need to abandon the structure, don’t hesitate. Just get everybody out safely and start over again somewhere else.

Freezing to Death in 60-Degree Weather