Home Grayman The Reality Of Being Gray. Daily Or As Needed?

The Reality Of Being Gray. Daily Or As Needed? 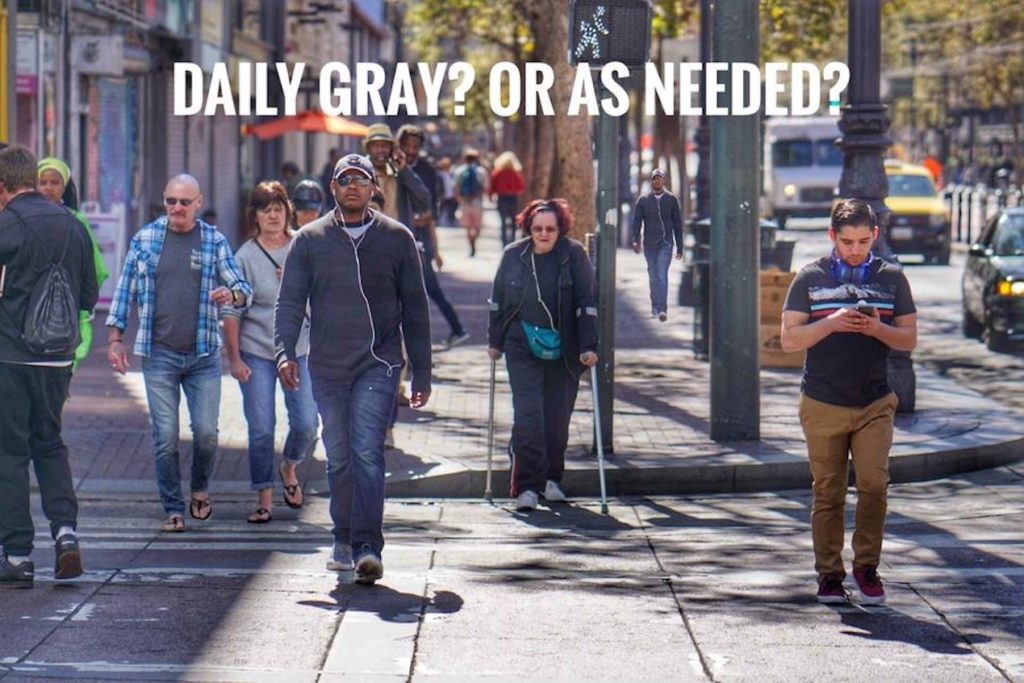 SITUATIONAL AWARENESS CHECK: First off, did you notice the man, with the white ear buds, was duplicated further back walking along the sidewalk? Check the article image. Blending in is key but can or should it be done 24/7?

I tend to get one of those looks whenever I bring up the term “grayman,” or being gray, in conversation. Anyone who is into prepping, survival skills, emergency preparedness, or being self-sufficient, knows of the look I am referring to.

To the unfamiliar, it may be helpful to define grayman before diving into the meat and potatoes of the article.

WHAT IS BEING GRAY?
Being gray is simply the act of not standing out in any discernable way to avoid drawing attention to yourself. You can think of it as camouflaging yourself, just not always in the literal sense.

The grayman accomplishes this in several ways as it pertains to self-reliance, survival studies, and preparedness. They do not talk publicly about supplies that they have or their emergency plans.

They do not advertise themselves with stickers on their vehicles or by the clothing that they wear. And they are also careful in how and where they purchase things.

Okay, now that we have a definition under our belts, we can start to delve into this topic a little further.

FULL-TIME, SELECTIVE, AND SHORT-TERM GRAYMAN
While I am not the sharpest tool in the shed, I like to think I have learned a few things in my time, especially in the methods of observation.

What I have observed about being gray is that it works for most people selectively and on a short-term basis, but not for the long haul or full time. Consider the following examples.

Full Time
For this example, I am going to use a person who is a “prepper.” Normally, I limit the use of this term as I do not care for it but am doing so for ease of conversation, and I am being general in my usage of it.

This person or prepper believes in self-sufficiency and stores water, food, and other supplies to be prepared for the unknown and does not expect help from outside sources during an emergency.

In some respects, this lifestyle is becoming more acceptable in the mainstream, but it has long been the motto within the preparedness community that a person should be gray in everything that they do.

Suffice to say a prepper should be careful in how, where, and how many supplies they purchase, and not advertise what they have or their plans or abilities because doing so could make them a target.

Additionally, it is the expectation of anyone who knows the prepper, i.e., friends and family, that they too should be gray about what they know about that prepper. Being gray in this manner requires diligence 24/7.

Selective
Being selectively gray means that a person chooses their level of concealment about any one topic.

For example, someone may purchase all their emergency supplies and tools online which is easily tracked by certain groups. However, that same person may not talk about those supplies to anyone.

So, they are not being gray about how they acquire supplies, but they are being gray by not openly advertising those purchases.

Short-Term
Being gray on a short-term basis primarily deals with immediate safety issues and threats.

For example, a person finds themselves in a group of people who strongly disagree with a statement that is printed on the shirt they are wearing.

To avoid drawing attention to themselves and ultimately confrontation, the person changes their shirt or covers up with a jacket. By doing this they are blending in and being gray for a limited time.

Breaking it Down
Using grayman techniques certainly works for almost anyone during the short-term. This is because short-term scenarios usually revolve around camouflaging oneself to the onlookers of the immediate area. However, some variables limit its effectiveness even in this situation.

For instance, if a person who is seven feet tall is walking in a crowd where the average height is under six feet tall, they will stand out no matter what they do.

Selectively being gray also works well for most people because it is rather easy to accomplish. It is not all that difficult when a person can pick and choose how they will handle themselves.

However, being a grayman full-time is a completely different situation.

THE REALITY
The reality of adopting a grayman lifestyle full-time is a difficult journey. It requires discipline and consistency 24/7. A person must be cautious of who they converse with, what they talk about, what kind of clothing they wear, how they carry themselves, items that they purchase, the amount of those items, how they are paid for, and their use of technology.

When we consider the interconnectivity, tracking, and usage of technology today the undertaking of the grayman approach is extremely difficult.

The mere fact that I am writing about this can cause conclusions to be drawn that I am knowledgeable or at least interested in this topic and therefore am not being gray.

Now, I am not saying a person cannot be gray and thereby should not partake in gray practices for the sake of safety.

Again, I will use the example from being selectively gray.

A person may not care about making large online purchases of supplies, which is okay. It is entirely different to then go tell everyone you meet or online that you have $15,000 worth of bows and arrows, firearms, food, and whatever else stockpiled in your home. This action is unwise and will paint a target on your back by those listening in.

Being gray full-time for a single person or someone who lives on their own is easier to do but still has its complications. Being gray becomes exponentially more difficult for those living with other people, especially children. Kids hear and see more than we give them credit for, but they often lack the filters for withholding information.

If a spouse is not fully on board with being gray full time, this too can cause serious issues and strain within a relationship.

The real nail in the coffin for being gray full-time is technology. We all have it, and we all use it often. From simple searches, to what we watch, purchase, talk about, and where we go, technology has obliterated a person’s ability to remain in the shadows.

FINAL THOUGHT
Taking on the grayman lifestyle full-time is not an impossibility but it does require a completely different lifestyle, daily discipline, consistency, and choices that most people are not willing to make.

I feel that the reality of being gray 24/7 is not in the cards for the average person. Short-term and selective gray methods, however, are entirely feasible.