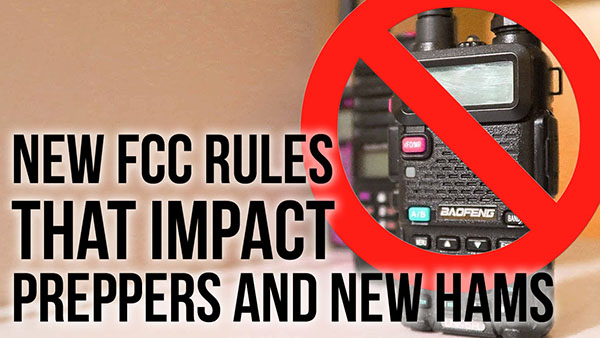 In September 2017, after a comment period, the FCC made changes to Part 95 Personal Radio Services Rules which included a restructuring and reorganization of the rules.  Some of the changes became effective immediately and the final change becomes effective September 30th, 2019.  Additionally, the FCC issued an Enforcement Advisory in September 2018 to give notice that the final ‘impacts’ of the new rules would come into effect a year later.  Part of the changes to the rules included a reorganization and re-numbering.

This article will not go through all the changes, but we will highlight those that will have a direct impact on those who currently have and use the ‘cheap Chinese’ radios such as Baofeng, BTECH and some TYT and other radios that are capable of operating in several different radio services.

There are two types of ‘license’ to use radio frequencies; one is a license specific to the radio service and the other is ‘license-by-rule.’ A license is specific to the radio service, i.e., if you have an Amateur Radio (ham) license it does not give you permission to operate in any other non-ham frequencies.  Within Part 95 the FRS, MURS and CB are ‘license-by-rule’so you do not need a license to operation on those frequencies.  GMRS requires a license; this is a simple application, $65 fee and is valid for 10 years (was 5 years prior to the rule changes) for yourself and immediate family.  Immediate family members are the licensee’s spouse, children, grandchildren, stepchildren, parents, grandparents, stepparents, brothers, sisters, aunts, uncles, nieces, nephews, and in-laws(as defined in 95.1705 (c).  The defining of who is an ‘immediate family member’ was an addition in the 2017 rule changes.

Subpart A of Part 95 contains General Rules and there are several that you should be aware of.

Subpart (a) states that if a Federal courtfinds that you willfully and knowinglyviolate any provision of the Communications Act you can be fined up to $10,000 or be imprisoned for up to one year.  If there is a subsequent violation imprisonment may not exceed two years.

Subpart (b) states that if a Federal court finds that you have willfully and knowingly violated any FCC rule, you may be fine up to $500 for each violation or, in the case of continuing violations, $500 for each day the violation continued.

Subpart (c) states that if the FCC finds that you have willfully or repeatedly violated one or more sections of the Communications Act or FCC rules you may be liable for forfeiture.

So, in (a) and (b) you are taken to court and they must prove that you willfully (deliberately, intentionally) and knowingly (had knowledge of the rule– by publishing them and by you using the radio services you acknowledge you know the rules).

In (c) it is up to the FCC to make the determination which means it is not a trial by your peers that decide.

There are a number of different subparts throughout the Part 95 that address the certification of a transmitter.  This is probably the most significant change in the rules and the one that directly impacts the use of the Baofeng and similar radios that can operate in multiple radio services.  If you have a Baofeng then you probably know that it will, right now, transmit across a wide range of frequencies; 136-174MHz and 400-520MHz. Therefore, these radios will transmit on all the radio services listed above as well as the Amateur Radio 2-meter and 70cm bands, a number of public safety frequencies and even the marine frequencies.

Many of the new subparts seem to be redundant, or perhaps written in isolation of the other subsections, but they make the point that the FCC does not want non-certified radios used in Part 95 radio services.

Subpart (a) states that each transmitter must be certified in accordance with the applicable subpart of the rules.

Subpart (c) states that certification will not be issued for a radio that has controls, switch or other adjustment that would allow the user to violate the rules.  In other words, change it to operate outside the radio service that it is certified for.

Subpart (c) of this section prohibits voice obscuring radios, effective September 30th.  There are a number of radios on the market (TYT is one brand I’m personally aware of) that have a voice scrambling mode.  This is not encryption per-se but an inversion of the audio.  Previously the FCC had issued an opinion that they did not consider this method as encryption because it was ‘generally available,’ meaning anyone with the same radio would have it.  However, in these new rules the FCC has reversed that decision.

This section lists some of the requirements that a radio must meet to be certificated for use on the FRS frequencies.  This includes a non-removable antenna that does not exceed ½ wave dipole.  It allows brief data transmissions (under 1 second) as well as automatic transmissions if responding to a GPS/location requests.   This is to allow some Garmin GPS (Garmin Rino series) devices to send their locations to similar units.

Subpart (e) specifically prohibits the manufacture or import of a radio that is capable of operating “in this and any other licensed or licensed-by-rule service” after September 30th2019.  This will specifically prohibit the manufacture or import of the Baofeng radios that are currently offered for sale. Such radios include the UV-5R and variant handhelds, the BTECH UV-5×3 hand held, and their mobiles including their 50x and 25x series because they currently will operate in the FRS/GMRS/MURS and ham frequencies.

This section specifies who may operate a radio in the GMRS. It also expanded the license period from 5 to 10 years (same as Amateur Radio).  Subsection (c) now contains a list of who the FCC considers family members that are covered under the one ‘family’ license; previously this had not been defined.

This section addresses the requirements for a radio to be certified to operate in the GMRS.  It includes the statements (subsection (d) and (e)) that after December 2017 a radio will no longer be issued a certificate if it is capable of operating in both the FRS and GMRS.

In subsection (c) it also states a radio “will not be certified” for GMRS if it is capable of operating in the Amateur Radio service.”

As with §95.591 in the FRS subsection, this subsection also contains the statement that sales of radios operating in both FRS and GMRS are prohibited after September 30th2019.  It also includes the statement that: “no person shall be permitted to manufacture or import, sell or offer for sale any radio equipment” that can operate in more than one service.  Note that this subsection states “any radio” whereas in §95.591 is only specified hand held radios.

While the FCC did clean up the Part 95 rules and did expand the frequencies for FRS by combining them with GMRS (with power limitations), they were not consistent in some of their wording in the various subparts. However, it is quite clear that the operating, manufacture, import, sale or offer for sale any radio that: 1) is not certified and/or 2) can operate in more than one service, will be a violation of FCC rules after September 30th.  What is notably absent from the new rules is the possession of a radio that can operate in multiple services, so you don’t need to throw out all the Baofeng’s and similar radios (however, if you are worried about possessing a radio that violates the rules I’ll pay shipping and you can send it to me and I’ll make sure it is not used in violation of the rules).

Between now and the end of September I think you are going to see a lot of flash sales and then very discounted prices as none of the manufacturers or sellers are going to want to have any stock on hand after September 30th.