14 Essential Knots for Every Survival Situation You May Encounter 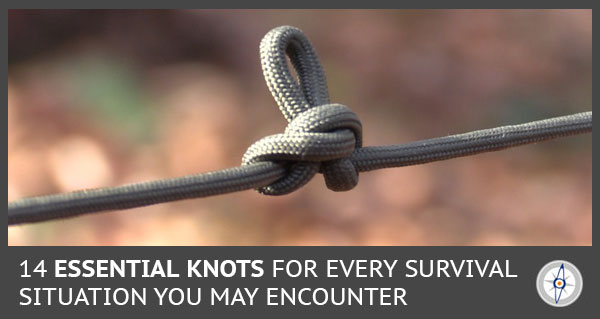 Knot tying is a skill set often overlooked by survival enthusiasts. While you can probably make do in a pinch with a simple overhand knot (think step 1 in tying your shoes), it won’t work in every situation…and you don’t want to trust your life to it.

Learning a variety of knots will make tasks like lashing two poles together, or securing a load to the top of your vehicle much easier.

Before we dive into our breakdown of the essential knots you need to know for survival, here are a couple of terms to add to your vocabulary:

The Square Knot is useful for joining two ends of a single line together in order to secure a bundle of objects. It most known for being used as a parcel knot. As a survival application, it is the best knot for tying a triangular bandage.

The Clove Hitch is used to easily fasten a line to a tree or post. It is also commonly used in pioneering to start and finish a lashing such as the traditional square lashing or tripod lashing.

The Bowline knot is a simple knot used to form a fixed loop at the end of a rope. It has the virtues of being both easy to tie and untie; most notably, it is easy to untie after being subjected to a load. It never slips nor jams and has a high breaking strength.  The bowline is sometimes referred to as the King of the Knots because of its importance.

The Taut-Line Hitch is an adjustable loop knot for use on lines under tension. It is useful when the length of a line will need to be periodically adjusted in order to maintain tension. It is typically used for securing tent lines in outdoor activities involving camping, by arborists when climbing trees, for tying down aircraft, for creating adjustable moorings in tidal areas, and to secure loads on vehicles.

The Sheet Bend is a knot that joins two ropes together. Doubled, it is effective in binding lines of different diameter or rigidity securely together, although it has a tendency to work loose when not under load.

The Tripod Lashing is used to join three spars together to form a tripod. You’ll commonly use this lashing when building shelters.

The Square Lashing is used to bind two objects together at right angles. It is your best method for securing two poles or limbs together when building a shelter.

The Figure-Eight knot or figure-of-eight knot is a type of stopper knot. It is very important in both sailing and rock climbing as a method of stopping ropes from running out of retaining devices.

The Trucker’s Hitch is a compound knot commonly used for securing loads on trucks or trailers. This general arrangement, using loops and turns in the rope itself to form a crude block and tackle, has long been used to tension lines.

The Double Fisherman’s Knot or grapevine knot is a bend, or knot used to join two lengths of rope. This knot is used most often in climbing, arboriculture, and search and rescue.

The Two Half-Hitches knot consists of an overhand knot tied around a post or tree, followed by a half-hitch.  It
can be placed under a lot of strain and is easy to untie.

The water knot (also tape knot, ring bend, grass knot, or overhand follow-through) is a knot frequently used in climbing for joining two ends of webbing together, for instance when making a sling.

The Rolling Hitch is typically used to add another leg to an existing line. A simple friction hitch, it is used for lengthwise pull along an object rather than at right angles.

The Timber Hitch is a knot used to attach a single length of rope to a cylindrical object. Secure while tension is maintained, it is easily untied even after heavy loading.

Knot tying is a depreciating skill, so you will need to practice frequently to keep your skills up. At minimum you need to be able to splice pieces of rope together,  lash poles together, tie down tarps to build shelters and strap gear to your pack. As a knot expert, you’ll be able to secure your supplies, hang a bucket of food out of reach of ground predators, and potentially even save a life.

If you enjoy other outdoor pursuits like boating, fishing or camping, becoming a connoisseur of knots is something you will never regret.

* Many of the Knot descriptions provided courtesy of Wikipedia.

Make Your Home a Hard Target Without Breaking the Bank