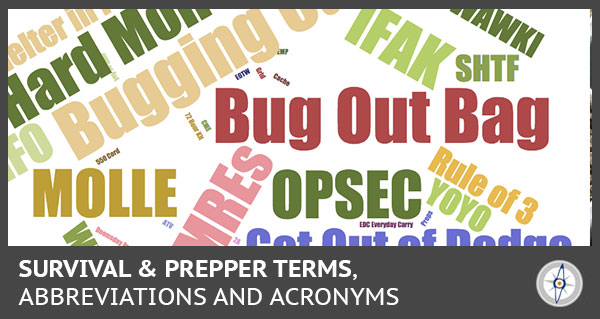 Even the most veteran prepper will occasionally come across a term he or she hasn’t heard before. And for newbies, conversing with long time survivalists can be like trying to understand a foreign language.

So this page is for new and old preppers alike. These terms are common ones you’ll encounter on forums, in books, on blogs and in general conversation about survival.

2A -The Second Amendment.

550 Cord – another name for Paracord.

72 Hour Kit – An ensemble of tools and supplies needed to sustain life, minimize suffering, maintain dignity and independence, and facilitate appropriate actions in an emergency requiring evacuation. Built to last for 3 days (72 hours).

Bugging In – Staying where you are, usually at your home; where most people keep majority of their preps, and the place you have probably fortified the most.

Bugging Out – Leaving / evacuating your primary place of residence/living/home.

Bug Out Bag (BOB) – A bag that is packed with items you will need if you’re forced to quickly evacuate your home.

Bug Out Vehicle (BOV) –  A vehicle, often a large truck or RV, that is specifically equipped to bug out.

Bug Out Location (BOL) – During the cold war this would be a bomb shelter. Today, think of this as a place you go when things get bad, like a cabin in the woods or any other place away from civilization you could lay low and wait out any problems.

Cache – A hoard of food stores or a collection of ammunition. Usually the term implies burying or hiding in some other manner because it is a secret stash.

CME – Coronal Mass Ejection. A set of powerful eruptions on the sun that break free from the solar atmosphere. If masses of plasma reach the earth they could knock out the electrical grid.

Doomsday Prepper – A popular term for a person preparing for the end of the world. Unique in their beliefs, motivations and strategies, doomsday preppers go to any lengths to make sure they are prepared for any of life’s uncertainties.

EDC – Everyday Carry. Something you carry with you every day. For example, a pocket knife, Leatherman tool, or concealed carry.

EMP – Electromagnetic Pulse. The result of a nuclear explosion high into the atmosphere (~300 miles above Earth for max effect), causes a massive instantaneous cascade of electrons bombarding the surface below. The resulting effect would (theoretically) cause extreme failure in electronic devices, electrical services and equipment.

EOTW – End of the World.

Faraday Cage – A metallic enclosure that protects your electronics from an EMP.

FIFO – First In, First Out. Used for food storage rotation.

GHB – Get Home Bag. Mostly a backpack or bag that’s easy to carry for traveling “Home”; it will contain items you will need to get home, probably walking.

Get Out of Dodge – A phrase that means one should leave town or get out of the city and stay somewhere else.

Go Bag – another name for Bug Out Bag.

Grid – our electrical grid. It is the network of electrical energy delivery and communications via high tension lines.

MOLLE – Modular Lightweight Load-carrying Equipment. Pronounced like “molly.”  It is used to define the current generation of load-bearing equipment and rucksacks utilized by the United States military.

MRE – Meals Ready to Eat. Originally a military food package and may be made up of one or more sealed packets of food (ready to eat) comprising up to a full meal.

Off Grid –  Living in a self-sufficient manner without reliance on one or more public utilities.

OPSEC – Operational Security. This is the protection of critical information like your location, what supplies you have stored, where you have stored your supplies, what weapons and ammo you have, etc.

Prepper – Someone who actively prepares for catastrophic events, disasters and SHTF situations. Stereotypically they do this through stockpiling food, water, and emergency supplies.

Rule of 3 – You can go 3 minutes without air, 3 hours without shelter, 3 days without water, 3 weeks without food.

Shelter in Place – The opposite of bugging out. It’s used to describe a situation where hunkering down in your home is the best option during an emergency situation.

Survivalist –  Used to describe someone who is actively preparing for SHTF situations. Survivalists often go beyond preppers by training themselves in self-defense, urban and wilderness survival, and a variety of other survival skills.

TEOTWAWKI – The End of the World As We Know It. A potential total wide-reaching or global problems, this is a worst case scenario. Probable total breakdown of society, economics, food/water supplies, other systems, life and civilization as we know it.

WROL – Without Rule of Law – a time when police, the military and government have lost control.

YOYO – You’re On Your Own

Zombie – the name for unprepared people that become and aggressive mob looking to take what you have.