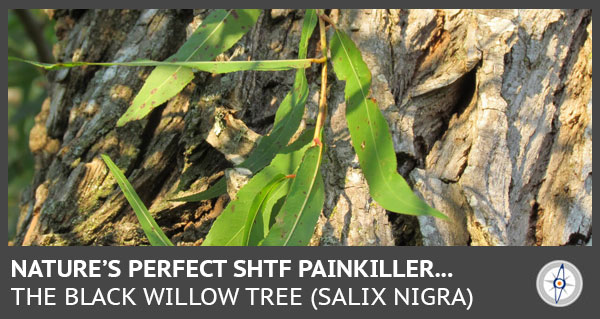 One of the most important advancements in human culture has been the development of analgesics, or pain-relieving drugs. These medicines not only help alleviate pain, they help humans to remain productive, even while they are suffering from things like headaches, backaches or arthritis.

Most of us have analgesics in our medicine cabinet, so relief is never very far away. However, in a survival situation, you likely won’t have access to these important medications. Fortunately, Mother Nature provides a few pain-relieving resources for just such situations, including one that is found in black willow trees (Salix nigra).

Willow trees and a handful of other plants possess a hormone called salicin. When consumed by humans, this salicin is converted into salicyclic acid, which is the precursor to aspirin (also known as acetylsalicylic acid).

While all willow species appear to produce this beneficial compound, some lack medicinally significant quantities of it. Some of those that are known to produce the chemical include white (Salix alba), purple (Salix purpurea), crack (Salix fragilis) and black willows. 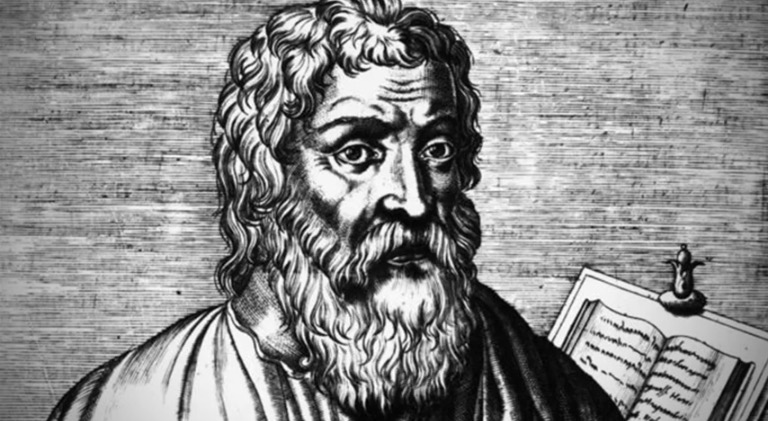 Hippocrates – the father of Western Medicine

Modern aspirin is made from synthetic forms of salicyclic acid, but humans have been using willow bark to ease their pain for at least 2,400 years. In fact, the earliest written accounts of such uses date back to Hippocrates – widely recognized as the father of Western medicine. Willow bark (as well as leaves and roots, in some cases) has been used as a pain killer by people from a wide variety of locations, including Europe, Asia and North America.

Of course, to harvest black willow bark, you’ll have to find the trees first. Fortunately, black willows are pretty easy to identify. With practice, you can learn to spot them from a considerable distance, which will help save you some unnecessary steps as you forage.

Black willows normally grow in predictable fashion across most of the Eastern United States. They are typically found at low, damp locations, where they’ve developed a number of adaptations enabling them to survive in these water-soaked soils. In fact, they often grow within mere feet of swamps, ponds and rivers. 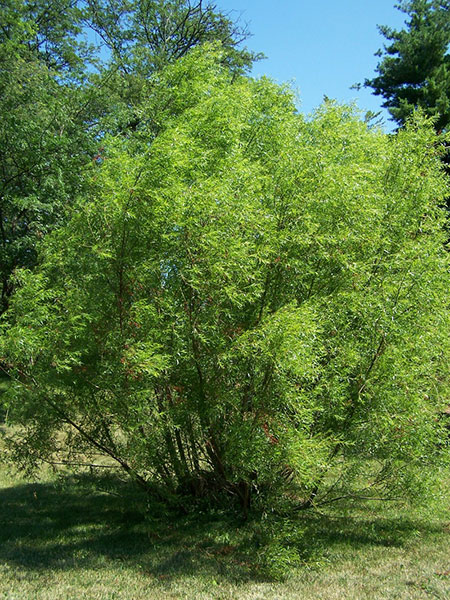 Black willows are the largest of the North American willows, and they occasionally exceed 60 feet in height (in the Mississippi River Valley, some black willows exceed 100 feet in height). However, most are much smaller, and some exhibit a shrub-like growth habit. They often possess multiple trunks, which can help contribute to their shrubby aesthetic. In most cases, the trunk is rather short and the crown spreads irregularly. Black willows are weak-wooded trees, so they frequently display missing and broken limbs, which were lost during strong storms. 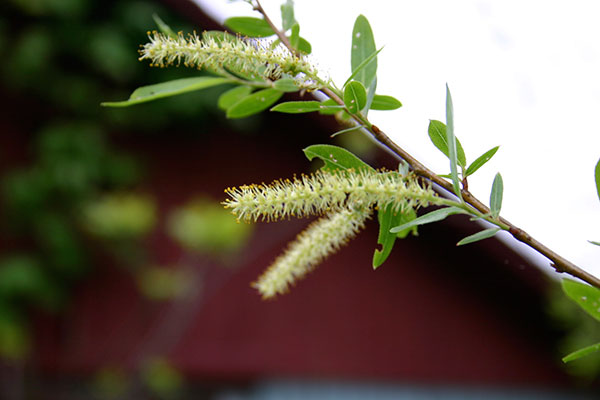 Black willow leaves are long, narrow and taper at the tip. They have fine serrations along their sides and occasionally grow to 5 inches in length, although most are slightly shorter than this. The leaves of black willows are arranged alternately on the twigs. The dark bark (from which the species derives its common name) is deeply furrowed, with distinct ridges. Black willow flowers are situated on hanging green catkins and are most common in the early spring. The fruit of black willow trees is similarly borne on catkins, and contains numerous fluffy seeds.

Many people use willow bark as an herbal supplement to relieve pain, fever and inflammation; but the methods they use to prepare it differ slightly from one person to the next. Many of these methods take some time to prepare, so it makes sense to start immediately, should you find yourself in a survival situation. 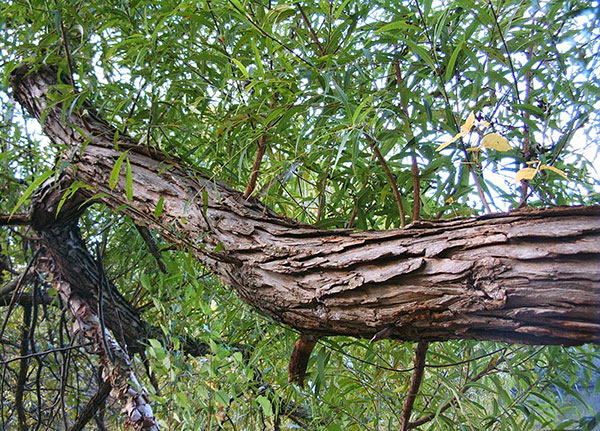 Most begin by removing the bark from young limbs. It is often easiest to do so in the spring, before the sap begins to flow. The bark should be cut into the smallest pieces possible and then allowed to dry for several days. From this point, the bark can simply be chewed.

Others prefer to make a tincture from the bark, by filling a jar with pieces of the bark and then filling the container with an alcohol, such as vodka. The concoction should then be left for some time before use (many sources recommend allowing it to soak like this for a month’s time or longer). Still others place pieces of the bark in boiling water for several minutes to make a willow-bark-infused tea.

Salicin and its related compounds are generally recognized as safe, but some people do experience side effects after ingesting these chemicals. Some people can even experience life-threatening reactions to the substance. Accordingly, you should always check with your doctor before using willow bark. Obviously, you won’t be able to do this in a survival situation, so it is wise to go ahead and bring up the subject the next time you are in your doctor’s office.

Willow bark – especially when consumed in large quantities – can cause gastric ulcers, just as aspirin can. Most authorities agree that willow bark should not be used by children, as it may lead to Reyes syndrome. Additionally, several medications and health conditions are incompatible with the use of aspirin and its chemical relatives. Because willow bark causes blood thinning, it should never be taken by those with clotting disorders or pregnant women.

While willow trees can be used for pain relief, they also provide a number of other resources that may help you survive in the bush. For example, young thin willow tree branches and twigs are great for making baskets, shoes or similar items. 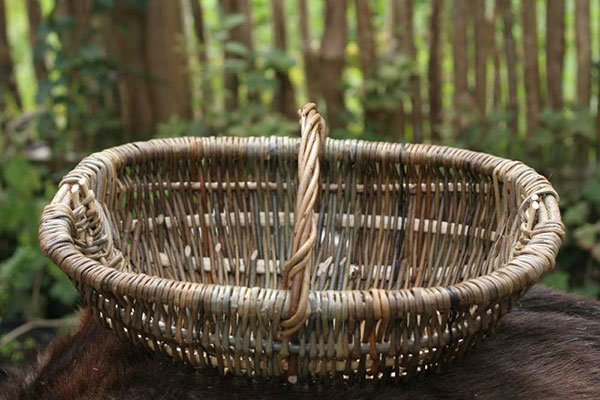 Because of the flexibility of these thin branches, they are easy to weave and will stand up to considerable abuse.

Willow wood is often full of water, so it can be time-consuming to prepare for use as fuel; and, once dry, it is so light and airy that it tends to release an abundance of initial heat, before burning out fairly quickly. However, dry willow wood can make excellent kindling, provided that it is very dry.

Additionally, willow roots have been used by primitive cultures to threat fever, coughs, gastrointestinal problems, and as an alternative to quinine – a medicine used to treat malaria. There isn’t much research that supports the efficacy of such uses, and further study is needed to determine the truth.

I’ve been using herbs a lot especially for my COPD and eye sight problems, I’m still looking for a pain reliving herb that doesn’t effect my clotting time, as I have Hemophilia and most like willow bark I can’t use along with tumeric, garlic and ginger and a few others, I guess I could move to a state that allows medical Marijuana lol but I don’t want to sell my home and have to have to look for a new home.