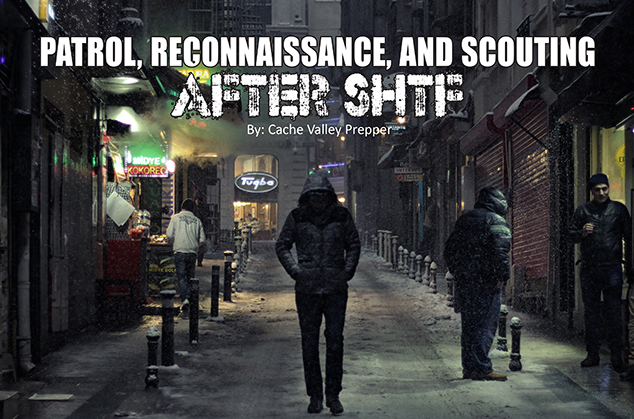 Patrolling, reconnaissance, and scouting are key situational awareness tools. They take patience and focus that’s alien to the ever increasing segment of society addicted to a constant supply of information fed to them via technology. Some of my pioneer ancestors would wait seasons or months for news from a few states away and years for a letter from family in the Eastern US or Europe.

There is a perceived urgency attributed to news that is often out of sync with reality. In disasters that disrupt the grid, survivors can be isolated by gridlocked transport and by lack of information. I have studied many instances where survivors have endangered themselves and loved ones to obtain information of no survival value. That in some cases even turned out to be false. 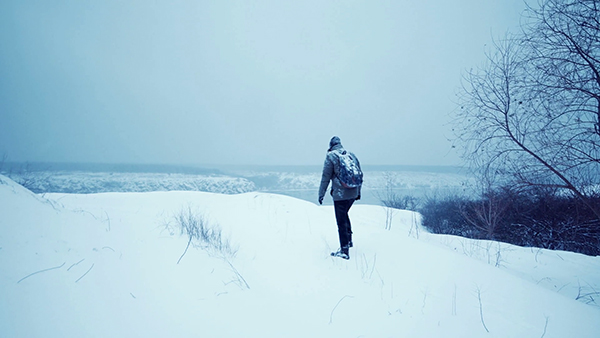 While accurate intelligence can help survivors make effective decisions, you won’t see news listed in the Rule of Threes or any other list of survival priorities. Lack of news doesn’t directly kill survivors. Understand what information is relevant to the survival of your group and what is just nice to know. Patience and restraint are warranted in post-SHTF intelligence gathering efforts.

Patrolling can be done on foot, from vehicles, watercraft, or even from the air if you have the resources. Patrolling from vehicles can cover a large area and provide mobility. It’s a platform for optics, sensors, and all kinds of goodies. The drawback being that it’s also high profile, easily spotted, easy to track, and easy to ambush if the vehicle primarily operates on roads and other lines of drift.

Vehicles also create obstacles to speaking with locals and some other types of intelligence gathering. Start with the foot patrol. It lays a foundation for all other methods of patrolling. Get out and survey nearby areas. Record your observations and create detailed maps.

Importance of Starting to Patrol Before a Catastrophe

Get to know the areas around your residence, work, properties, and other areas you spend time. Also, get to know the people who live in it pre-SHTF. Establish a baseline beforehand so you don’t miss important observations immediately before the SHTF. You’ll have little opportunity for a baseline of comparison post-SHTF. Realize that although survivalists often refer to SHTF as an event, and catastrophes are sometimes triggered by specific events, it’s more often a process.

Most people are indecisive and vulnerable to normalcy bias. According to Dr. John Leach, author of Survival Psychology, as much as 80% of survivors freeze as they succumb to analysis paralysis. Again, the breakdown of society is typically a process and not an event. Noticing changes early on may give you valuable time to gather loved ones and get off the X. It will let you gather last minute supplies, make other lifesaving preparations, or execute a plan of action.

Some types of patrols, as defined in US military doctrine, have more relevance than others to post-SHTF survival. This is important to keep in mind. While there are several types of patrols, they generally fall into two categories: combat patrols and reconnaissance patrols. 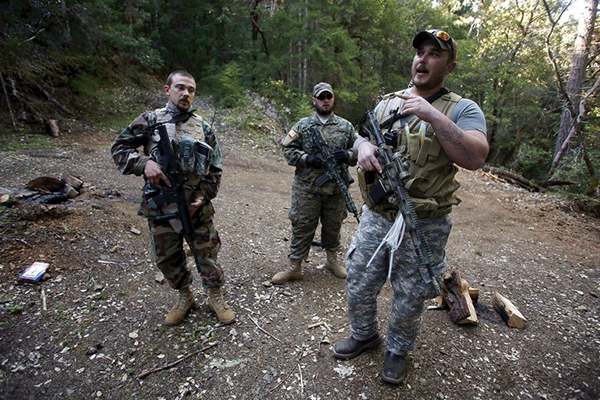 Maps are an important part of emergency planning and are useful whether you patrol or not. They’re vital for planning patrols. Mapping sites and software are a huge help in creating a detailed map of your neighborhood and surrounding areas. This can be done at any budget and even without spending any money. Counties keep records of property lines and landowners which is very helpful in most areas. This is particularly helpful in rural, semi-rural, and suburban areas. 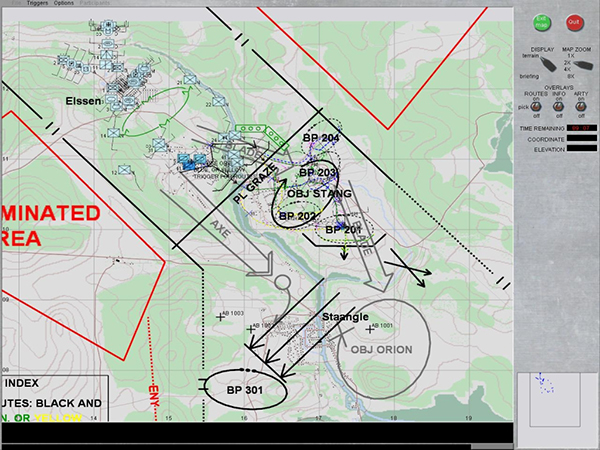 It used to be that survivalists would put the USGS topographical map up on the wall that contained their homestead and then fold the borders in on bordering maps. This meant retreats had up to 9 maps on a broad section of wall just to display the immediately surrounding area. Today, most universities can custom print a map centered on whatever point you like. It will be on water-resistant paper and can apply whatever layers of data you like very inexpensively. The last one I purchased ran about $6 dollars each for maps about 3’ x 5’.

There will be resources should you need to start over post-SHTF or are caught without maps for some reason. Check out homeowners associations, hotels, churches, phone books, ranger stations, and government offices.

A sand table is a three-dimensional model of a key portion of the battlefield. It’s helpful for planning patrols, ambushes, or operations. It’s also an effective tool for briefings and debriefings. Sand tables can be improvised as needed in the field using dirt, rocks, sticks, and labels. Destroy them when no longer needed. Sand tables at fixed sites can be somewhat more elaborate as they’ll be used over and over.

Reconnaissance should focus on life saving and mission critical information for group survival. Recon patrols or scouting missions typically rely on stealth and avoid contact with potential enemies. Information can be gathered using the five senses, optics, sensors, by talking to people when appropriate, and by tracking.

In urban areas, it’s often easier to hide in plain sight using covert camouflage by looking like everybody else. Don’t stand out and try to blend into the crowd. In wild areas, overt camouflage is used to blend in with the terrain instead of the populace. While traveling, it’s necessary to transition between overt and covert camouflage. Clothing and equipment should be purchased with transition in mind. Reversible clothing and layered clothing are especially useful for transitioning between the two environments such as in get home and bugout scenarios. 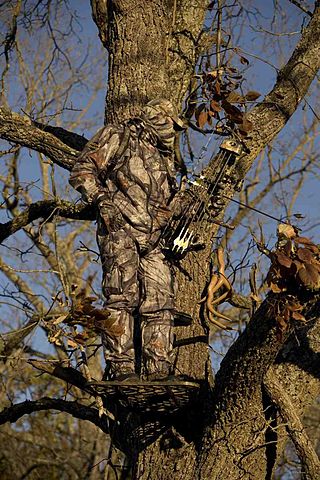 I carry a large letter-sized notebook for emergency planning and a smaller 4’x6” notebook for in the field, along with pens. It’s so useful that I bought a wire-o binding machine to create my own. I use it for all kinds of things but it’s crucial for recon. Here are some of the most critical notes:

Direction sampling searches are a key tool for foraging and identifying resources. You could think of them as recon patrols adapted to survival. They’re useful in both wild and built environments. Decide which direction is most likely to yield the resources based on what you know. Reconnoiter that direction, foraging resources, fishing, setting traps, or hunting as you go. Walk as far as is reasonable and return to camp. The next time you take a direction sample, go a different way. Eventually you’ll complete a systematic survey of the lands around your camp or fixed site.

This is useful in determining when an area has been tapped of resources and when it may be necessary to move camp to survive. Sitting, sleeping, and starving until you get picked up is only possible on survival TV. There is little sense in staying in an area that has been over foraged, hunted out, overfished, and trapped out. For this reason, most hunter-gatherers are migratory to some extent. At least try to have winter and summer camps, fishing camps, hunting camps, and so on.

The objectives of scouting are generally to find the enemy or observe terrain to find a path through it. Scouting parties are typically small, about squad size or two-man scouting teams. The USMC fields scout/snipers and many services employ special forces. There is a great deal of overlap between the two roles, so the designation of scout/sniper is a logical one. Scouting has utility for the survivalist both with fixed sights and while moving. 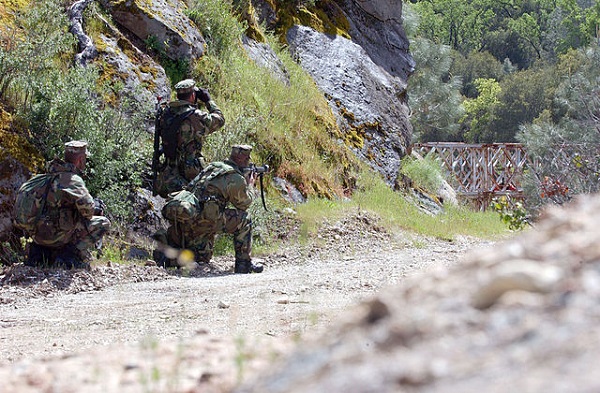 Scouting on the Trail and for Nomadic or Displaced Groups

This is where we depart from modern military strategy and must look to primitive strategy. Cultures all over the planet have dealt with the problem of providing security. They also scouted routes for the larger traveling groups of displaced persons, nomadic tribes, migrants, and emigrants all throughout history.

The problems faced under these circumstances cannot be resolved by paging through military manuals. Modern militaries have different goals, resources, structure, and force makeup. Also, the only military march in U.S. history that comes anywhere close would be the first leg of the march made by the Mormon Battalion in 1846. To say that the longest march in the history of the U.S. military was an anomaly would be an understatement.

Most survivalists say that they’ll never be refugees or displaced persons in mil-speak. However, most survivalist who can envision a circumstance where they might be compelled to bugout on foot will have a lot in common with a tribe of Native Americans, a band of Bedouins, or a handcart company of pioneers crossing the plains in the 1800’s. They likely won’t have as much in common with an infantry squad, which is what most model their groups after.

None of these groups accomplished what they did using the modern infantry squad as a model. Like survival groups, they didn’t have 6 guys in the logistics tail for every guy at the tip of the spear. They couldn’t have duplicated modern military logistics infrastructure in any meaningful way. Each of these groups understood something many survivalists don’t and compensated for it. The reality is that if you put 100+ lbs packs on a guy who works a desk job, his wife, 2.5 kids, grandma, and golden retriever, they won’t make it to the end of the block much less to a faraway bugout property.

If the scout/security element encountered the enemy, they went around or caused a distraction to lead them away from the supply train. They left trail signs to communicate with the main body, which they in turn obliterated. Some groups also stepped into the footprints of the person ahead of them on the trail to disguise their numbers. 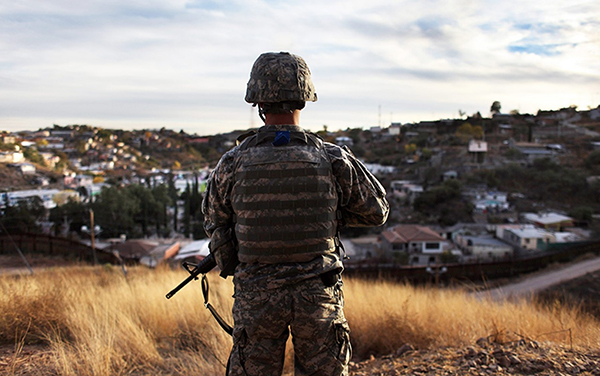 Understand the difference between lifesaving intelligence and nice to know information that simply feeds the habits of the addicted. There is no sense in risking lives for the latter. Before the SHTF, get out in your neighborhood and pound the pavement to establish a baseline now. Once you have your baseline, a field guide is a key tool for recon. It should focus on life saving and mission critical information that is difficult to remember.

Don’t only study military strategy as you’ll have more in common with groups like the pioneers. Look to the many cultures that divide into faster scout/security and slower supply elements. Then the scouts should choose and clear the path for the slower movers.