You’re in the prime strike zone for a hurricane if your home is anywhere on the gulf or east coasts. That includes millions of people. I happen to be one of those people as I live in Florida and have dealt with hurricanes all my life. As a result, I have a pretty good grasp on what needs done to get ready.

One of the worst aspects of a hurricane, to me at least, are the days or even weeks leading up to them. With the advance of weather satellites we can see a storm when it leaves the coast of Africa and know almost immediately if it will develop into something major. Last year’s onslaught by Irma is a prime example of what I’m talking about.

There is a simple solution to this problem, just stay prepared! If you’re in the strike zone of a potential hurricane, have the basic supplies on hand from June first until the end of November. The majority of these supplies are things you’ll use every day anyway, so it’s not really a burden to have extra on hand. You can simply use the supplies throughout the rest of the year should no storm come through.

This is also a good way to rotate your stocks. Batteries will go bad. Water that’s in milk jug style containers can leak as the plastic breaks down. Gas stored in cans will also go bad. Treating it will buy you some time but it will ultimately break down. By using these items up and replacing them, you’ll always have fresh supplies on hand.

Check out this video to see Chris and Jon’s thoughts on preparing for hurricane season!

There are certain items that seem to vanish first whenever a storm is predicted. A couple of these are curious if not humorous. I’ve often joked that there must a lot of french toast being eaten during a storm because bread and milk go quickly. Bottled water is another item that flies off store shelves.

Last year when a storm was being predicted, some people were lulled into a false sense of security by the changing predictions and didn’t stock up. I heard a woman in a grocery store worried about not having any bottled water. She had gone from store to store looking for water without success and was near tears.

Water is one of the most important items we need to have and it’s also the easiest to store. I’m constantly amazed at people rushing to the stores to buy water. We are fortunate in the US to have some of the safest tap water in the world. You may not like drinking it but it won’t cause any health damages. Since storing water is simple, fill every container you have.

The WaterBob is a convenient way to store a large amount of water quickly. You simply place it in your tub and fill it. Using this inexpensive item, you can easily store up to a hundred gallons of safe drinking water. Another option is to reuse two-liter soda bottles. Two-liter bottles work better than gallon milk jugs. The milk jug will break down over time and leak. The plastic the two-liter is made from lasts years longer and will provide a safe source of drinking water.

Another tip for your reused jugs is to fill them with water and stick them in the freezer. This will aid in keeping your food colder for a longer period of time and will also provide additional drinking water as it melts. The more frozen mass there is in the freezer, the better it functions. It will help those intermittent runs of the generator do a better job at keeping your freezer cold.

Water is one of the most important commodities after a disaster and it’s also the easiest to store. Plan ahead and have containers on hand to fill with water. Save yourself the hassle and expense of having to run out and buy bottled water. Worse yet, needing to buy water only to find it all sold out.

Having quick and easy to prepare food on hand is another necessity. Sandwiches are great for the start of a crisis, but you’ll need shelf stable food for after it passes. Canned products are easy to store and prepare. Worst case, most of it can be eaten directly from the can without heating. Though I recommend heating anything you’ll eat from a can.

Freeze dried food is another item that will store for a very long time. It takes a little more time to prepare, but you don’t have to worry about it going bad on the shelf. Don’t need to spend money on expensive long-term storage food. Just keep in mind the things your family already eats and store accordingly.

Be prepared to feed yourself for at least a week and preferably three. The recovery from a disaster could easily keep you isolated for up to a week. 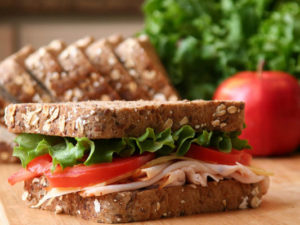 When considering our food storage, we need to think of a way to cook it. Most of the items you store will simply need to be reheated or have hot water added. This is good as it means nearly any cooking method will work. A simple camp stove would be enough to keep you and your family fed.

You can upgrade to something like a Camp Chef camp stove that has an oven. It runs on five pound propane canisters or you can get an adapter that will run on twenty-five pound bottles. Even your barbecue grill could fill this role if you’ve stored enough charcoal. Be sure to store enough fuel to last one to three weeks for whatever cooking method you decide on.

If you’re expecting to get high winds it may be a good idea to cover your windows. I use pieces of plywood with a small vision hole cut through it to give a little view of the outside. These can be numbered and reused year after year. It’s even better if you can have traditional shutters installed. Just have a way to protect those openings. Once wind gets into the house it can cause the roof to blow off. 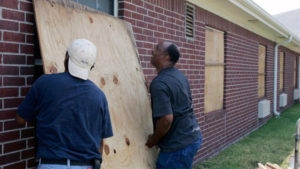 Have other materials on hand in case there is a breech to your home. Rolls of heavy plastic and roofing nails would be a good addition to a response kit. As well as duct tape. Add some N-95 masks to protect your respiratory system, especially when cleaning up. Heavy gloves and good boots with a steel shank would also be good. There could be a number of nails in places you wouldn’t expect to find one. Have some boots designed to take a hit from debris could very well save your leg.

It would be a really good idea to store some gas whether you have a generator or not. As we all know from previous experience, gas is one of the very first things to run out. People panic and rush to the station days ahead of any storm to fill their cars. This causes a strain on supply. A couple days later the same thing happens again when the new path comes out. Then we start to see stations with no fuel.

Have a couple cans on hand for your emergency fuel. You’ll have enough fuel to fill your car if stations run out or simply cannot open. This could mean the difference of being able to self-rescue or simply get out of the impacted area.

It’s always tempting to run the generator full time. We all want to be comfortable, but we have to evaluate our needs during the time of crisis. Run the generator enough to keep the fridge and freezer cool. To charge the phones. Get some laundry done, fill water jugs, whatever needs done. Get the most out of the run time. You can even get your hot water heater warmed up and get in a shower.

The next category of items to get for storm preparation are tools. Chainsaws, pry bars, come alongs, and the usual hand tools should all be readily accessible. Make sure you have oil for mixing your two-stroke fuel so you don’t have to go looking for it. I would keep a spare chain and bar for the chainsaw on hand as well. Also have plenty of bar oil stored up. You will be relying on this machine to help you get things cleaned up so treat it accordingly.

I mentioned having plastic on hand earlier. This is very important should you suffer a breech of your home. Most insurance companies require you to make emergency repairs to mitigate damage. Have plastic, tarps, roofing nails, and the like on hand that will allow you to do just that. Not to mention it may allow you to remain in your home rather than have to leave.

If you have natural gas service I highly recommend having a valve tool on hand. As a storm approaches it may be in your best interest to turn off the gas service just in case there is a rupture in the line. Going around and relighting pilot lights is far less of a pain than watching your home go up in flames.

Lighting is another thing to consider. The storms always seem to move through at night. If it is during the day, it can be so dark out you can’t really see in the house. There are so many quality LED lanterns out there that I wouldn’t even bother with candles. They introduce the possibility of fire and there’s no sense in adding to an already stressful situation.

Be sure to stock plenty of batteries for whatever light source you choose. Don’t be cheap, lay them in deep. You will use them and it sure beats sitting in the dark.

Another necessary item that I’d like to mention is to make certain to have a AM/FM radio. So many people overlook this simple device that can keep you informed. During hurricanes cell towers can come down. The internet can be interrupted. Most radio stations will still be on the air. They’ll allow you to keep abreast of what’s going on and alert to any tornados that may be approaching your area. In the aftermath it can also inform you of where resources are available.

June is quickly approaching so get your storm preps in order now. You don’t want to be one of those people standing in a grocery store lamenting the empty shelves where bottled water once sat. The last couple of years was an eye opener for a lot people. We hadn’t had a storm in several years leading up to it. Use this as motivation to not become complacent. Remember that if you stay ready, you don’t have to get ready.

Also known as “Angery American”, is the author of the Survivalist series of books. Chris has been involved in prepping since the 90’s. He practices primitive skills as well as modern survival techniques that focus on being prepared with the proper equipment.