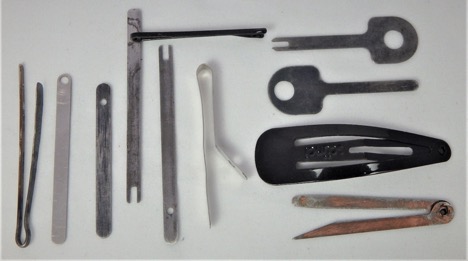 Caption: Handcuff shims, both commercial and improvised. Left to right: Oscar Delta Mini Gulag, two more by Oscar Delta, two dual-pall shims by Endured Limits, an Uber-shim by Oscar Delta. Top to bottom: Dual pawl and an Ultra-slim from Law Industries, hair clip, combo shim/qwik-stick/decoder (made by the author from a hair clip.)

Please understand that I’m not a lawyer and that nothing in this article should be misconstrued as legal advice. By continuing to read, you agree that you are responsible for your actions and any consequences that result from them. Otherwise, please stop reading now. The reason is that this article is for Survival Dispatch in Florida, and some of Florida’s laws regarding anything that can be used to open handcuff keys have potentially serious consequences. If you are arrested by law enforcement and carrying a shim, bobby pin or hair clip that can be used to shim handcuffs, I’d let the officer know immediately, or you may risk a third-degree felony. My intent here is to help folks intending to escape illegal restraint, not lawful arrest, which typically helps folks from the frying pan into the fire.

What Makes a Good Handcuff Shim?

Here is what I incorporate into an effective handcuff key for restraint escape designed to open the highest number of modern handcuffs with a single key: 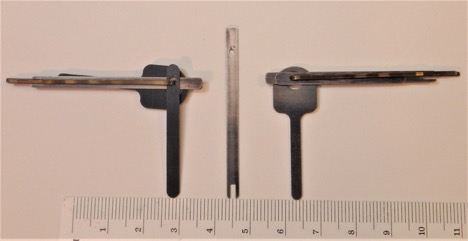 Caption: Here you can see the comparative with the width of three handcuff shims. The narrowest shim (right) opens cheap handcuffs, whereas the other two shims could not. The center Shim is for shim-resistant dual-pawl handcuffs.

Since most shims currently on the market are less-effective with the cheap handcuffs most likely to be used by criminals, unless you may make your own or modify commercial models, you’ll be stuck carrying more than one handcuff shim, which makes your tools thicker and more likely to be discovered. The human hand is remarkably sensitive, able to detect the difference between one or two sheets of paper, so any reduction in thickness is material.

In my experience, most shims can be punched without breaking. They can also be drilled. My favorite tool for working on restraint escape gear is a diamond cutoff disc for rotary tool, which is coin-shaped, easily concealed, and usually, more effective sans the rotary tool for most work on shims and handcuff keys unless you need to reduce the width of a shim. Then you need to remove some material. When working on pre-prepared restraint escape gear at home, a pair of calipers can come in handy for measuring tolerances of both handcuffs and the tools that open them.

There is an argument for using field-expedient tools in the field, but don’t get caught without raw materials. Even many SEALs carry a few bobby pins for this very reason.

The Importance of Carry On Gear