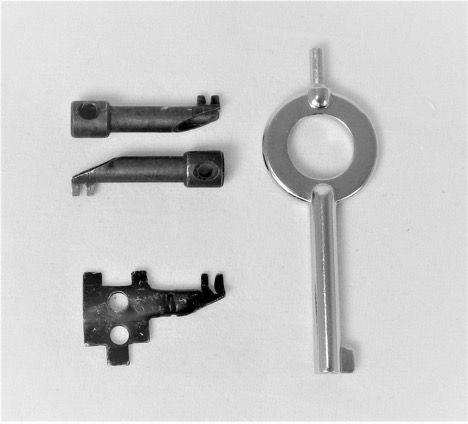 First off, I’m not a lawyer, and nothing in this article should be misconstrued as legal advice. You are responsible for your actions and their consequences. That said, I’m writing this for Survival Dispatch, which is based out of Florida, which has some heavy-duty laws that pertain to handcuff keys. From what I can tell, if you get arrested by law enforcement and you’re carrying a handcuff key, you’d best let them know about it, or you risk a third-degree felony unless you are law enforcement, licensed security or license in one of a few other related fields.

I’m not saying that what meets my needs is exactly what you need. Your needs may differ from mine.

I mostly carry handcuff keys along with other gear to help me escape unlawful restraint, both because I travel to South America where the risk of kidnap is high for folks like myself, and also in case things here in the States go sideways, and it becomes more like South Americ, which could happen in a hurry if the power grid fails for more than a day or so.

Here is what I incorporate into an effective handcuff key for restraint escape designed to open the highest number of modern handcuffs with a single key: 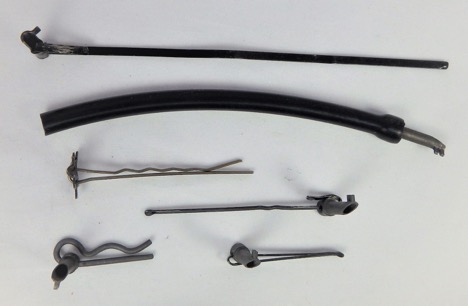 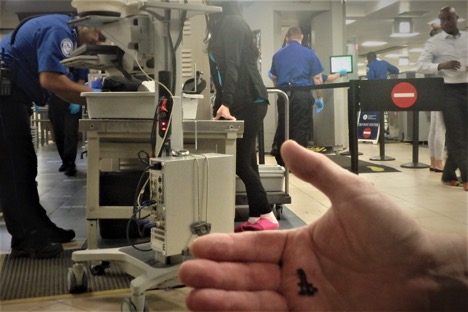 Caption: An early prototype flat handcuff key that just passed right through a TSA full body scan and pat down. Mrs. Cache is distracting a guard (and apparently some guy in line) while I grab a photo.

When opening handcuffs, open them like you are picking the lock even though you are using a key. Feel the mechanism with the key. Pull the key out or push it in just a hair until it sweeps the double lock bar(s) and lock bar smoothly. If you meet resistance, adjust the position of the key slightly and try again until it opens. If you apply too much force to the key, it will break, and then you may be even worse off than before you tried to open the lock because part of the key may bind in the mechanism or the keyway.

This probably shouldn’t come as a surprise (but usually does), but criminals often use cheap military surplus store handcuffs instead of quality law enforcement handcuffs and law enforcement officers and survivalists tend to practice with latter because it’s what they have handy. Cheap handcuffs often don’t have smooth internals like more expensive handcuffs, especially if they have spent the last few years knocking around and rusting behind the seat in some deadbeat criminal’s pickup. I suggest that you add such a set of handcuffs to your collection and practice opening them.

Where can I order a flat handcuff key like the one you show as a prototype?