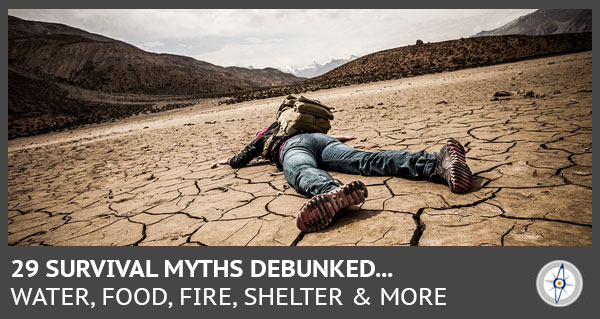 One of the difficulties of learning survival methods is that sometimes the right thing to do isn’t obvious. If you don’t have a background that supports a specific survival scenario, your first instinct might get you killed. That’s why learning the skills and methods of survival is so much more important than any gear you can purchase. I urge each person to learn as much as they can as about becoming a survivalist.

The other issue is that there are many common misconceptions about specific survival situations. Some of these are hundreds of years old, and have become engrained in our culture. It can be very difficult to determine what is myth and what is fact. My suggestion is to either refer to a survival expert or do some research to figure it out for yourself.

Unfortunately, there are plenty of celebrity survivalists who sometimes reinforce these myths. They can be more focused on ratings than on providing good information. But it puts people at risk when they do end up needing to survive.

With the growing popularity of survival shows, it’s more and more important that we dispel myths. We must drill down to the facts of what will keep you alive and what will not. In this article, we’ll break down by category the myths that could endanger you in a survival scenario.

However, what you can’t see can kill you. The bacteria and microorganisms in tainted water aren’t visible to the naked eye. While clear running water is a better bet than a murky pond, it still isn’t safe. You should always purify your water before drinking it. The only potential exceptions are fresh rainwater, snow/ice runoff, and spring water. You should still take precautions even with these sources.

It’s estimated that 75% of the civilized world is chronically dehydrated. Part of the reason why is because we wait until we’re thirsty to drink water. You should plan on drinking one gallon per day in normal conditions and two gallons per day with extreme heat, cold, or exhaustion. I drank 3 gallons while hiking 10 miles per day during my most recent long-distance challenge, and was still dehydrated.

Water Myth #3: I can eat snow for hydration.

Water Myth #4: I can drink my urine for dehydration.

There’s one survivalist on television that’s known for this stunt. Do not do it. Urine is full of sodium and impurities. If it doesn’t make you throw up, it will most certainly make you more dehydrated.

Water Myth #5: I can continually survive on coconut water.

Nope, coconut water is only good for a drink every so often. Drinking too much will give you diarrhea that will end up causing more dehydration.

Fire Myth #1: If I have a lighter or matches, I should be able to start a fire.

Not necessarily true. While a lighter and matches can help, windy or wet conditions can make it very difficult to start a fire. In addition, you still must know how to collect the proper tinder, kindling, and fuel. Then you’ll need to know how add these items in the right amounts to get a fire going. It’s very possible to have a lighter and still not be able to start a fire. They make it look so easy on television, but starting a fire is almost always a challenge.

Fire Myth #2: I should start my fire as soon as possible or keep it going all day.

This might be the best option if you have a huge amount of firewood and are concerned about starting a fire later. However, people underestimate how much firewood they’ll use each hour. Just to make it through the night, it’s suggested that you have a stack of large split wood at least knee high. You can easily double that if you start your fire too early in the day.

While it is much more difficult, there are ways to find dry wood in the rain. You should pull your wood from dead branches that are up off the ground. You can usually find some small, dead branches at the base of evergreen trees. For larger branches, strip off all the bark that has absorbed moisture. Then split the wood exposing the dry interior. You can also use a manual pencil sharpener for small sticks to get dry shavings for tinder.

Fire Myth #4: Any dry wood will work for a friction fire.

The hardness of the wood plays a huge role in how well it will work for a friction fire. You may have to try a half dozen different combinations of wood before finding one that will give a good ember. Friction fire is much more difficult than you might think.

Fire Myth #5: I do not need fire in a warm climate.

Sometimes this is the case, but often the nighttime temperatures will drop significantly. I am about to complete a survival challenge in the high desert. The difference between daytime and nighttime temperatures is about 40F. That means that I could sweat through my shirt during the day and die from hypothermia at night. Fire is always a good idea.

While food can help you stay strong and mentally sharp, you can survive three weeks without it. Water, fire, and shelter are much more important.

Food Myth #2: Hunting is the best way to get food.

You constantly see survivalists on television sharpening a spear or making a bow to go hunting for big game. The reality is that their odds of success are very low. In addition, they expend huge amounts of energy and risk injury. A better bet is fishing or collecting wild edibles.

For most people, this is not the case. Unlike berries and green vegetation, mushrooms are very hard to identify. In addition, eating the wrong mushrooms can kill you quickly. Unless you are an expert, stay away.

Food Myth #4: Setting a few traps will get a meal.

The most consistent figures are that it takes about 20 traps to catch anything on a given day. This is assuming the traps are baited and set properly. If you set a trap line, do it the right way.

Food Myth #5: When you find an abundant food source, eat as much as you can.

Unfortunately, eating a lot when you have been starving for days can make you sick. You may end up vomiting and losing all those nutrients. Eat a little at a time and you should be fine.

Food Myth #7: Since some animals are nocturnal, fishing or hunting at night is smart.

This is a bad idea. Leaving your camp without a source of light is always unsafe. It’s so easy to fall and injure yourself when you can’t see. In addition, the predators in the area can likely see you much better than you can see them.

Shelter Myth #1: I should build a big shelter so there is plenty of room.

Building a large shelter expends a great deal of energy and time. More importantly, a large shelter is more difficult to keep warm. Your best bet is to build a small, simple shelter in a short amount of time using minimal resources.

Shelter Myth #2: I should build my shelter close to water.

While you want to be close enough to easily collect water, I suggest keeping at least 100 yards away. Both predators and insects will be heavy at night around water sources. In addition, flooding can be a major concern.

Shelter Myth #3: I can sleep on the ground if needed.

Sure, but the ground draws a huge amount of heat out of your body. You will be much colder sleeping on the ground. Instead, mound up a pile of leaves at least 4” thick when compacted. You can also build a platform for sleeping.

Absolutely, but they make good shelters for all kinds of predators as well. Before you sleep in a cave make sure to look for tracks, fur, bones, or any other signs of animals.

Other Myth #1: If my car breaks down, I should start walking for help.

Your car is the best signaling tool you can have. It’s large, metallic, and brightly colored. It has a horn and headlights for signaling. It can also keep you warm for quite some time. Stick near your car unless you have no other choice.

Other Myth #2: I can just yell for help.

Yelling can be effective, but it can also wear you out. In addition, the human voice often gets lost in the wind. A whistle is a much better way to signal. It is more distinctive and requires less energy.

Other Myth #3: Any severe bleeding requires a tourniquet.

Unfortunately, tourniquets have been heavily emphasized in first aid manuals for decades or longer. This technique should only be used if a victim is at risk of dying from blood loss. You should first try applying pressure with a bandage and holding the limb above their heart. A tourniquet will likely cause the victim to require amputation so it’s a last resort.

Other Myth #4: If bitten by a venomous snake, I should cut the bite and suck out the poison.

It has recently been determined that this is a very bad idea. In addition to increasing the potential for infection, you may end up poisoning your mouth. Even snake bite kits are a bad idea as they can circulate the venom faster. If you are bitten by a venomous snake, your only good option is a hospital.

Other Myth #5: A gun is the best survival weapon.

Not in most cases. Guns require bullets. Bullets run out eventually. In addition, gunfire alerts other people to your position and scares off game in the area.

Other Myth #6: Predators are a major threat.

There are parts of the world where you must be prepared to deal with predators. However, most of the time you are more likely to die from hypothermia or dehydration.

Other Myth #7: Once I find the proper direction, I can just keep walking.

You hear stories of hikers walking in circles in the wilderness. This is because their dominant foot causes them to walk at a slight angle. To accommodate for this, you should step in the opposite direction each time you reach an obstacle like a tree or a rock. Also, recheck your direction once an hour at least.

Other Myth #8: It doesn’t matter where I urinate in the wilderness.

It does if you plan to hunt or trap game. If you pee wherever it’s convenient, the likelihood of stepping in your pee at some point is high. Then the scent is tracked with you when hunting or setting traps. Pick a designated spot and urinate there every time.

I hope you have learned a few things from this article and that we have dispelled some of the common survival myths. Always consider your sources and check the facts. We have only scratched the surface of dangerous myths in this article. When your life is on the line, you want to know what is fact and what is just a myth.