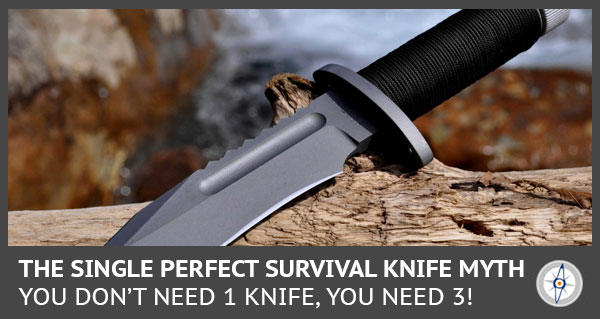 Ask most any experienced outdoor survivalist and they will all likely agree that a well designed and properly constructed knife is Man’s best friend when it comes to wrestling subsistence from the wilderness.

However, in so many of the articles published on the topic of how to choose a survival knife, the authors would have you believe that there is such a thing as a single, all-purpose, survival knife that is capable of performing every task that a person needs when attempting to survive in the wilderness.

This is simply not true!

When surviving in the wilderness, a person needs to perform many different tasks such as cutting saplings, splitting logs, constructing traps and snares, and removing the hide from harvested game animals.

Consequently, rather than carrying a single survival knife and expecting it to do everything you need in a survival situation, a far better solution is to carry more than one.

Instead of thinking of survival knives as single, all-purpose tools, they should instead be thought of as part of a three-part system:

Although they are often overlooked by inexperienced woodsmen, a heavy-duty chopping tool is one of the most user-friendly wilderness survival tools you will ever meet! However, early American bladesmiths were sorely lacking in innovation when it came to heavy-duty chopping tools since Americans imported the hatchet from Europe. The only tool suitable for this purpose that American bladesmiths had developed at the time was the Bowie Knife and, while they are adequate for the job, neither is optimum for the purpose.

Fortunately, because the peoples of Thailand, Malaysia, and the Philippines live in a woody jungle, they have long recognized the need for a large knife designed specifically for chopping wood. They developed such designs as the Parang, the Enep, the Bolo, and the Barong to fill this niche. Also, although the exact shape and length of these knives varies from village to village, each of these designs was specifically developed for cutting hard, woody, vegetation and they all have a characteristic overall shape which makes them easily recognizable to the experienced eye. 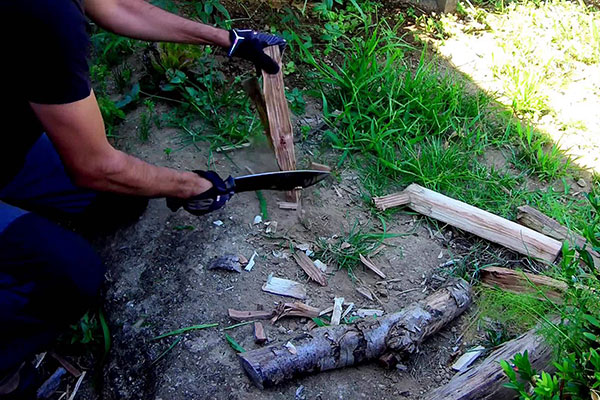 While some of these knives are more akin to the South American Machete (which was designed for cutting relatively soft vegetation), in their shorter and heavier versions, they are like a hybrid version of a machete and hatchet. They feature extra-thick spines and extreme weight-forward designs that cut deeply like a hatchet. You get the benefits of a machete while retaining the versatility of a knife.

Tools like the Kershaw Camp 10 (a modern version of the Thai Enep), the Fox Knives Parang XL, or the Bark River Knives Grasso Bolo are all excellent choices for a modern, heavy-duty, chopping tool for wilderness survival.

As a compliment to your heavy-duty chopping tool, you should also add a highly versatile bushcraft knife such as the Randall’s Adventure Training ESSE-5, the KA-BAR Mark 1 or, the Cold Steel Master Hunter to serve as a general purpose tool when the heavy chopping tool is either too big, too heavy or both. Such a knife should have either a Clip Point or a Drop Point blade design, and the blade should measure somewhere between 4 and 5 inches.

Because you will find that you have frequent need for your bushcraft knife, you will also find that you need to sharpen it frequently. Thus, it is also helpful to carry a large folding knife such as the Buck model 110 Folding Hunter, the Benchmade Crooked River or, the Ontario Knife Company RAT Model 1. That way, by reserving your folding knife strictly for skinning game animals, you will always have a knife with a razor sharp edge at hand, and you will not have to stop to sharpen your knife prior to processing game.

Because you will need to perform many different tasks with your survival knives ranging from chopping, splitting, cutting, and carving to digging in the ground for edible roots and tubers (all of which can be very hard on a knife), you should pay special attention to the steel that the blade is made from.

Rather than falling victim to the single survival knife myth, a far better option is to think of your survival knives the same way a golfer views his golf clubs. After all, while a person could play eighteen holes of golf with nothing more than a putter or a driver, each golf club is specifically designed to perform a particular task and the same is true of survival knives!

7 of the Easiest Foods You Can Find in Eastern Forests

10 Non-Power Tools You Need for Survival

The Bandana – An Underrated Bit of Survival...

I agree with most of this, the basic message is true. Why limit yourself to one or even 2 knives? I do disagree somewhat with the large knife/small knife comparison. A big knife will do everything a small knife will do just maybe not as easily, a small knife cannot do the heavy-duty work a big knife can. If you could only have one knife it should be a big one like the Kershaw Camp 10 shown or a Cold Steel Trailmaster or in the jungle, a machete-type as described. I would take one with saw teeth on the back of the blade-two tools in one! Just not one with a D-guard, makes it almost impossible to use the saw! Instead of a small folder, I would go with a multi-tool like the Leatherman Wave which has TWO knife blades plus all the other tools. As for a medium [4 to 7 inch blade], a lot will depend on the expected use. A hunter, for instance, will have different requirements than a Special Ops warrior. Les Stroud’s Survival Knife is a good multi-purpose knife which could, in an emergency, stand alone. It has a semi-serrated blade, a pommel that will stand up to pounding and comes with a fire steel, whistle, sharpening strip on the back of the sheath and a tip sheet of survival info which stores in the sheath. For general bushcraft use I like the Skandi edge grind. It is fine for all-around use and excels at wood carving. The Tops Knives Brakimo is a fine example of this type. It has TWO divots in the handle [one on each side, why not?] for use as a bearing block for a fire drill and a high-quality Kydex sheath which has a rotating belt clip so it can be worn at any angle, 360 degrees. Anyone care to comment?