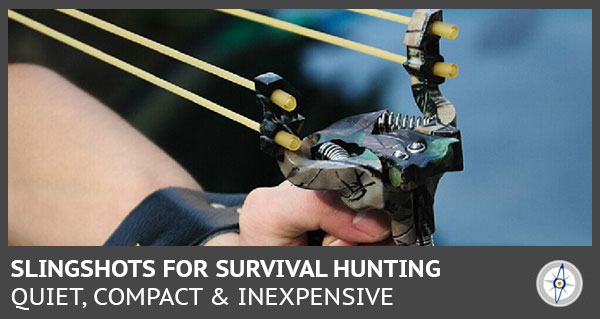 Should you ever find yourself in a survival situation, the need to keep yourself fed will be one of your top priorities. While a person can certainly make do for a while by collecting and consuming forage foods such as edible insects, leafy plants, fruits and, tubers, the fact is the Human body requires a reasonable intake of protein to remain healthy.

Game animals are the best sources for protein in this type of scenario.

The Evolution of the Slingshot

If you are old enough, you may remember the somewhat primitive, homemade, kid’s slingshots toys made from forked tree limbs with bands cut from car tire inner tubes…or cheaply manufactured ones that had simple wooden frames with flat latex rubber bands.

While these were fun to play around with as kids, they are by no means serious hunting tools. They lacked in power and didn’t have the braces needed for an accurate shot. Whenever you would pull the bands back the slingshot would tilt backwards in your hand. In order to shoot either type, you had to place the thumb of your shooting hand against the frame in order to provide support which tended to adversely affect your accuracy. 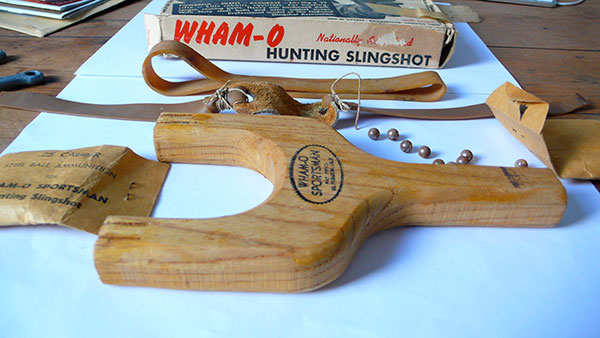 But, fortunately for modern survivalists, slingshots technology has evolved over the years. Current models features much more powerful bands made from latex rubber tubing complete with wrist braces so that you no longer have to place your thumb against the frame in order to draw it.

One of the first commercially manufactured slingshots of this type was made by a toy company called Wham-O. Wham-O produced a model called the Wrist Rocket that had a frame made of hollow aluminum tubing with a piece of closed cell foam to pad the wrist brace and round latex rubber power bands. 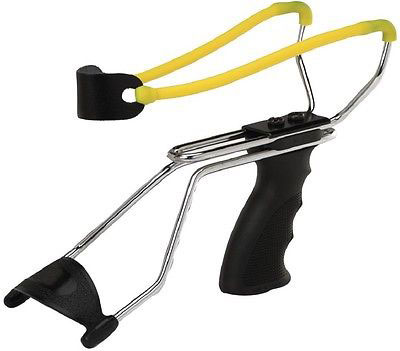 But, while the Wrist Rocket was considerably more powerful than the Sportsman (plain wood frame, no brace), and significantly easier to draw, it was still very much a kid’s toy compared to some of the models on the market today. In fact, some of today’s highly evolved slingshot models look more like something that you would see in science fiction movie rather than in a toy store.

The latest models feature frames made from machined aluminum and have dual, triple, or even quadruple power bands which make them eminently better suited for the purpose of survival hunting. 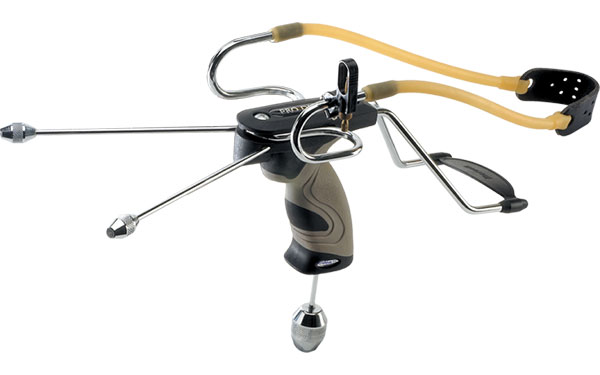 While those ultra-modern slingshot models are certainly visually appealing, some of them cost $150 or more! Fortunately, the more basic models produced by Barnett, Marksman, Trumark, and Daisy are perfectly well suited for the purpose of wilderness survival hunting…and they all have price tags that make them easily affordable.

While you could go with a takedown .22 rifle or recurve bow, using a slingshot for survival hunting does carry with it certain advantages.

Provided that you choose to purchase one of the models with a folding wrist brace, they can be conveniently carried in your back trouser pocket where they are easily accessible at a moment’s notice.

Furthermore, due to the much improved power bands combined with the wrist brace, they produce a significant amount of kinetic energy which is easily sufficient for killing small game species such as birds, squirrels, and rabbits.

Plus, they are often available with your choice of standard or extra-power bands…which means they can be used for hunting somewhat larger game animals. 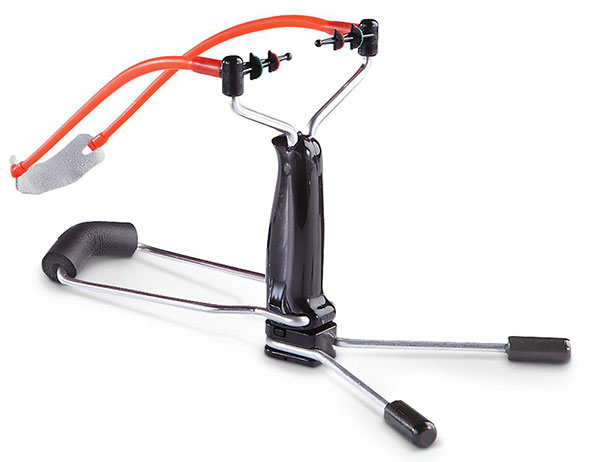 Some models even feature fiber optic sight pins and stabilizers similar to those used by compound bow archers which can make them much easier to aim and far more accurate to shoot.

Perhaps best of all, they can fire a very wide range of ammunition types.

For instance, in a pinch, you could simply pick up semi-round pebbles from a stream bed. It should be noted that due to the irregular shape, this type of slingshot ammunition does not always fly true to the mark. 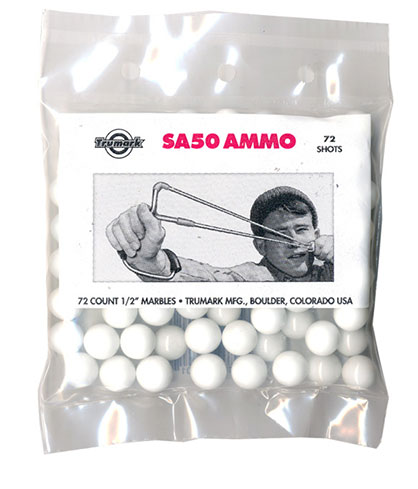 Slingshot manufacturers sell specialized slingshot ammunition such as ball bearings made of steel in various sizes. Another options is to purchase glass marble ammunition made from white glass. This “tracer” ammunition is fairly easy to follow with your eyes. However, this type of ammunition is more expensive than the norm.

If you are on a tight budget be aware that most large department stores such as Kmart and Walmart sell large bags of standard glass marbles in their toy departments which can be purchased relatively cheaply. Another option is to purchase lead buckshot used for reloading shotgun shells from a shooter’s supply store such as Midway. Because this type of slingshot ammunition is purchased in bulk in 5 lb. boxes, it is very economically feasible.

Buckshot also delivers significantly more kinetic energy than either glass marbles or steel shot, and is considerably more lethal due to lead’s much greater density.

It can be purchased in several different diameters ranging from number 4 (0.24 diameter) to 00 (0.33 diameter). The larger the shot is, the more kinetic energy it delivers.

Last but not least, because hitting a very small target such as bird which seldom stays still for any length of time can be difficult, you can also load your slingshot with either steel BB’s or much smaller lead shot in sizes 6, 7, or 8 to create a shotgun-like effect.

This slingshot can be carried with relative ease, and be used to hunt small game animals to keep yourself supplied with the protein your body needs to survive. Lastly, because they are capable of firing a wide range of relatively inexpensive ammunition types, slingshots are inexpensive to use for both target practice and hunting purposes.

How to Begin Prepping