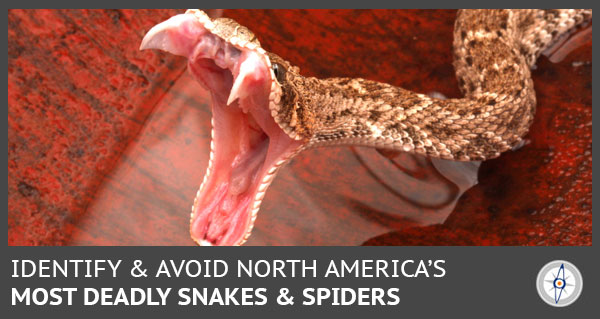 When people think about the dangers of surviving in the wilds of North America, they tend to make animal attacks a much larger concern than they should. Statistics show that very few people die from animal attacks in these scenarios.

The odds of being taken down by a bear, wolf, coyote, or mountain lion are very small compared to the threat of hypothermia, dehydration, or starvation. That being said, the smaller venomous creatures we may face can be impairing or deadly and should not be taken lightly.

Venomous snakes and spiders kill and injure more people worldwide than any of the larger predators filling our nightmares. This holds true for North America as well. 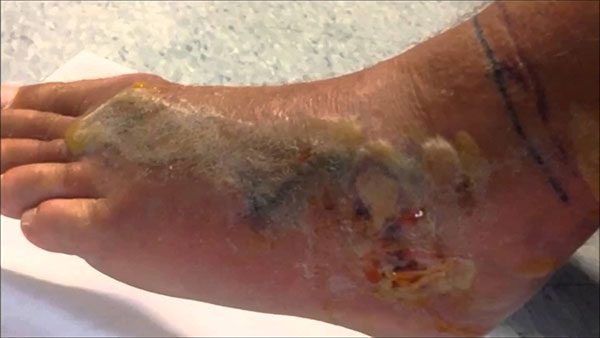 A bite from a venomous snake can cause serious damage

In the United States alone, over 8,000 people a year are severely injured by venomous snakes. Due to anti-venom, the vast majority of these people survive. However, they can still be left with life changing injuries due to the aggressive nature of the venom.

In this article we will discuss the most dangerous snakes and spiders in North America. This list is in no particular order, and it factors in strength of venom, aggressive nature, deaths per year, and bites per year.

We will also discuss ways to avoid being bitten by these dangerous creatures, and what to do if you are. Hopefully this information will help you avoid getting bitten!

When trying to avoid being bitten by venomous snakes or spiders, you have to think about the nature of these animals. Humans are not a food source, so when they bite it is purely in self-defense.

They do not like to be startled and do not like other animals intruding on their space. They also like to hide so that they can surprise smaller animals which are more ideal as a food source. Because of this, there are certain areas that are more prone to have venomous snakes or spiders than others.

Downed logs and rocks are prime areas for both threats. Often snakes will lie coiled and ready to strike on one side of a downed log. Because of this, it is best to step on the log and step wide versus stepping over the log putting your foot right on top of a snake. 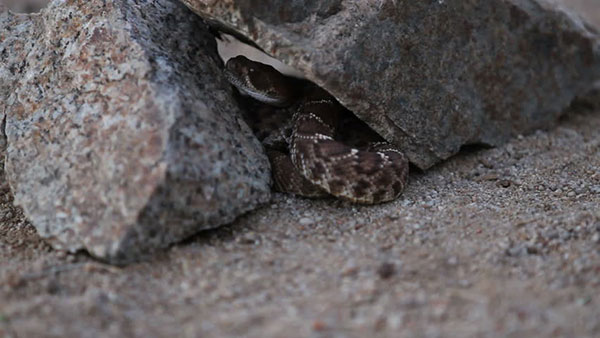 The same goes for boulders or rocks. Snakes are warm blooded and often like to sun themselves on rocks to stay warm. Spiders like to hang out and spin webs in the little hidden spaces under and between rocks and logs.

Flipping over loose debris is also a dangerous activity for both of these threats. Often people are bitten by snakes when flipping rocks or logs. Sheet metal is another dangerous item to lift because the metal heats up in the sun and attracts snakes. Wood piles are favorites for certain types of spiders, so you must use caution.

There are two primary areas to avoid in order to prevent an encounter with these creatures. Snakes love the water, so plan to see venomous snakes if you are near streams, rivers, ponds, or lakes. Spiders love enclosed, dark spaces such as attics and wood sheds. It is smart to avoid these areas entirely if you wish to avoid the threat completely. If you are hiking in the woods, staying on a designated trail is a good way to help avoid snakes as they normally avoid these trails.

Please understand that anti-venom is vital to stopping the progression of a bite from a venomous snake or spider. You cannot treat the bite yourself. You cannot suck out the poison or prevent it from spreading.

You must get to a doctor as quickly as possible.

Some bites will only cause minor damage, while others could kill you. However, there are things you can do to help medical personnel with your treatment.

With bites, a permanent marker is your best friend. You never know when you might lose consciousness or become delirious, so marking your skin can give messages to the EMT. Circle the point of the bite. 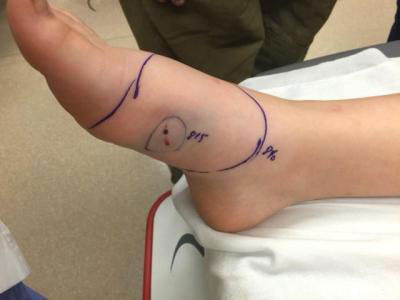 You will notice a red area develop and grow around the bite as time goes on. Continue drawing circles to show the development of the red area along with the exact time of your notes. In addition, note the time of the initial bite and any initial symptoms. Then note the time and symptoms on your arm any time they change.

While you do not want to accelerate your symptoms by increasing your heart rate, you do need to get to help. If you have cellular reception and know your location, then calling for help is best.

If you are dealing with a spider bite, you likely have time to get yourself to a doctor without calling for rescue. Spider bites take a bit longer to disable a person.

Since I was a boy I have been warned to watch for cottonmouths around the creeks and ponds we frequented. These are thick-bodied, dark snakes that are aggressive swimmers. I have actually seen them swim across bodies of water specifically to attack a person. They are known as cottonmouths because they typically open their mouth and show the white inside before they strike. These snakes can be found across most of southern and eastern North America. 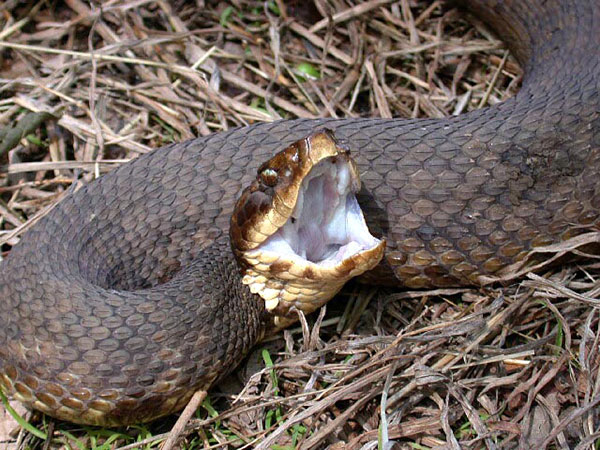 You will most often find these snakes around bodies of water as they are actually the only semi-aquatic viper in the world. They are most dangerous in July and August when they will strike at anything warm blooded. The heat of this time period makes their senses more dulled, which also makes the cottonmouth a bit paranoid.

The venom is quite aggressive and is known to require amputations if not treated quickly. It can lead to death if anti-venom is not administered. The cottonmouth bites a high number of people in North America each year.

This viper is a large, dark rattlesnake most commonly found in the southeast portion of North America. The venom is highly potent, and the long fangs can pump a huge amount of venom into the body. They are found in wooded areas as the name implies. When a person is surprised by a timber rattlesnake and bitten, the result is usually extreme. 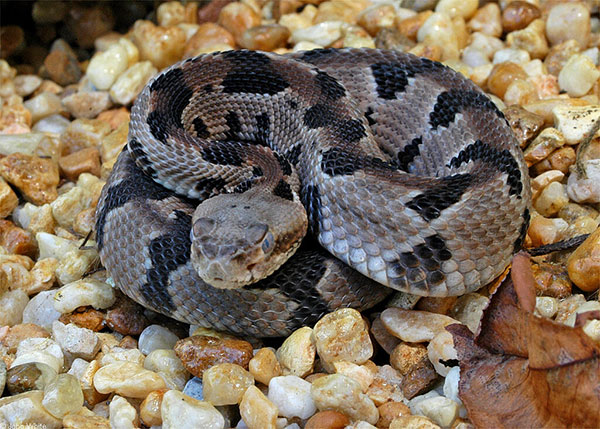 However, the saving grace of the timber rattlesnake versus other species is that it is docile and incredibly patient. Once it decides to coil up and prepare to strike, it will give a long warning with its rattle. The rattle on a timber rattler is huge and very loud. You have a good amount of time to slowly back out of the area if you hear that rattle going.

This rattlesnake with a distinctive diamond patter is a true killer. There are several varieties of black diamond, and some have venom so strong than an extra dose of anti-venom must be used on bite victims. 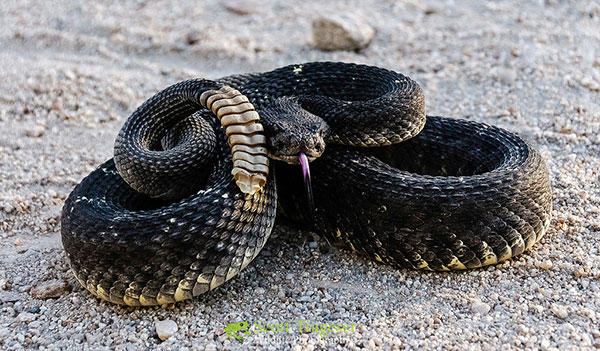 The nerve endings are attacked directly causing that much more damage. This snake can be found in the western portion of North America from Mexico to Canada.

This viper has a much smaller head than its relatives, but still poses a threat. It gets its name from the vertical stripes seen on the body of the snake. 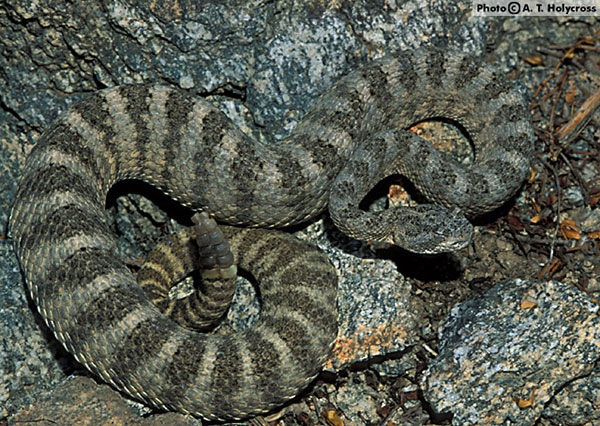 While the venom is some of the strongest in the world, the snake only injects a small amount of venom. In addition, this viper is only found in a relatively small area in Arizona and northern Mexico, so the number of bites is very small.

This is another snake I grew up fearing. They are all over forests in North America, and their camouflage is incredible. In addition, it freezes when threatened instead of running or rattling, so many people end up stepping on the snake. I remember having one of these living under my tent platform during Boy Scout camp. 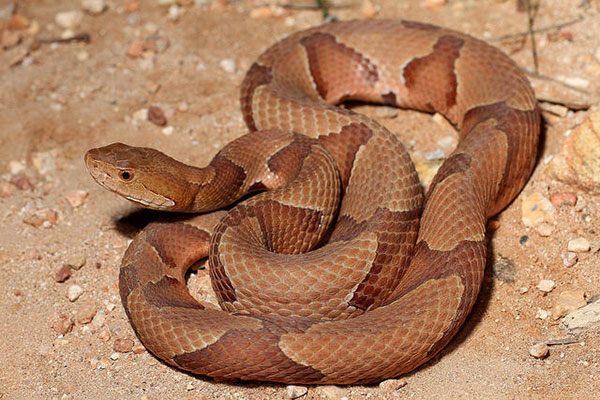 The copperhead actually bites more people than any other snake on our list. It is not aggressive, but populations are high and they hide everywhere. Thankfully the venom is the least powerful of any viper, so you have some time to get to help. However, like all venomous snakes you will still need anti-venom.

This snake has a distinctive pattern of red and black rings, and it was once considered one of the most dangerous snakes in North America. It is quite reclusive and can only been found in the southeastern United States. 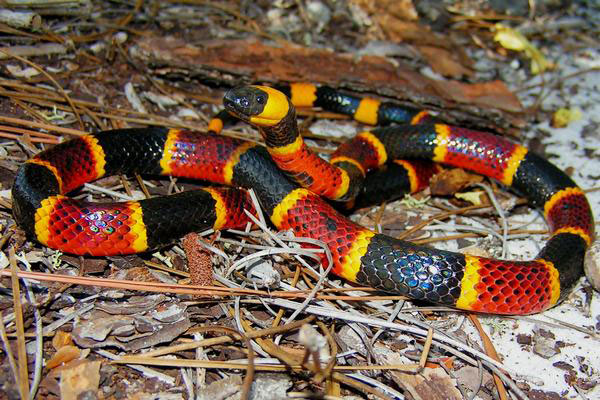 Bites are actually rare, and this snake has little control on how much venom it injects. While it has the potential to do a great deal of damage, the eastern coral snake normally injects a very small amount of venom in defensive wounds.

This snake is one of the most famous North American snakes because of its method of venom delivery. Unlike the tiger rattler that has strong venom and injects a small amount, the western diamondback has weak venom but injects a huge amount. 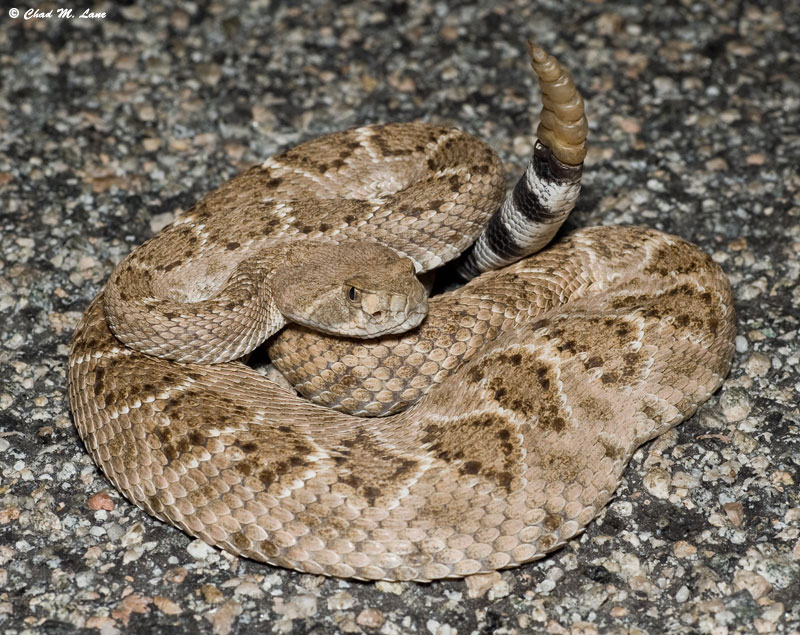 This bite causes internal bleeding, necrotic tissue, intense pain, swelling, and muscle damage. It is responsible for the most snake related deaths in Mexico and the second most in the United States.

This snake is a beast and is responsible for the most snake bite deaths in the US. It is the largest rattlesnake in the world with huge fangs, and a very potent venom. 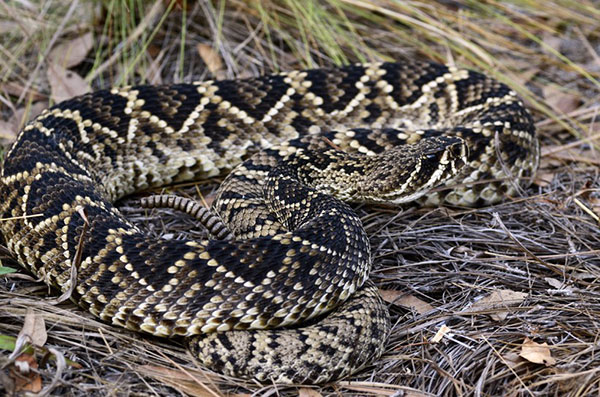 The bite delivers a large amount of venom which can actually cause bleeding from the mouth almost instantly. If you get bit by this snake you have about a one in three chance of surviving.

This rattler is pale in color to blend in with its grassy surroundings. It is much less aggressive than its eastern and western cousins, and its bite is much less potent. 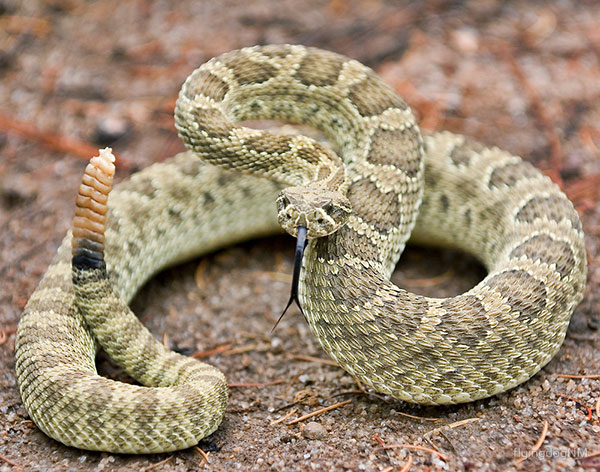 This southern snake is dangerous for a very different reason. The venom is more potent than the tiger rattler, but works in a different way. 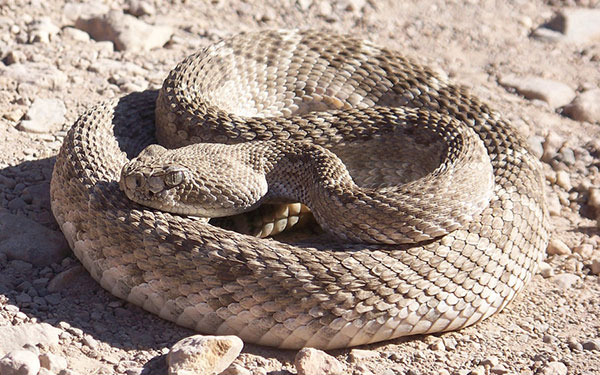 It has a delayed reaction, so often you do not feel anything initially. Then after a while it kicks in and causes respiratory failure. Do not mess with this guy.

The most notable of these spiders in the brown recluse because of how commonly it is found in North America. This spider is very comfortable in residential settings, but typically does not bite unless threatened. 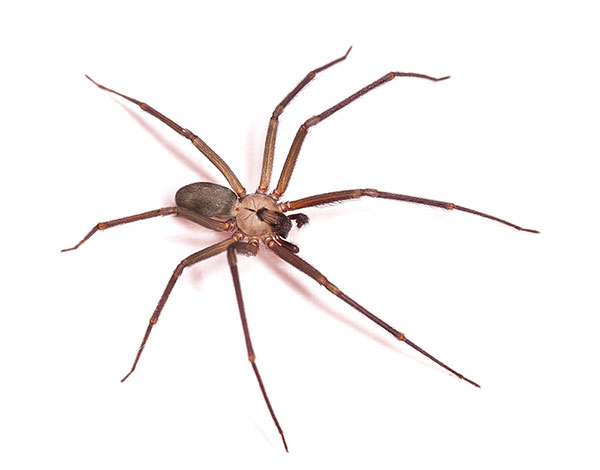 It is a small brown spider and has a black violin on its back with the handle pointing away from the head. Its venom can cause necrosis and eventually death.

These spiders are also very common in North America but prefer outdoor structures such as sheds and wood piles. The black widow is the most common and has a black body with a red or orange hourglass shape on the underside of the abdomen. 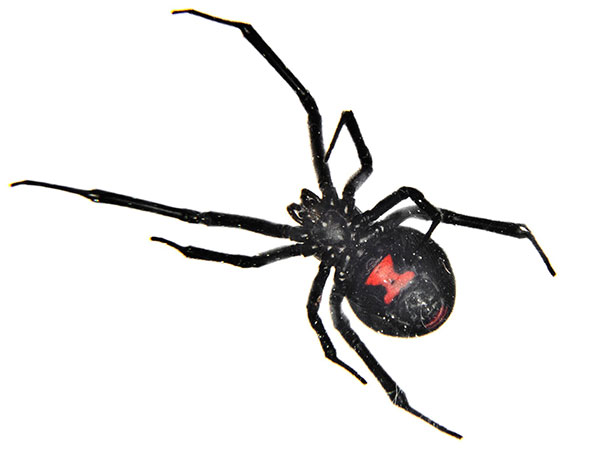 The venom of this spider is actually one of the most powerful in the world, and is actually 15 times more powerful than that of the prairie rattlesnake. It also causes necrosis and eventual death.

There are plenty of creepy crawlies that can put you in the hospital or grave. The key to safety is to be aware of your surroundings, and to wear protective clothing.

Know how to identify these threats and where they may be hiding. As a worst case scenario, know what to do if you are bitten by one of these animals. With a little knowledge and a little luck, you will be absolutely fine.