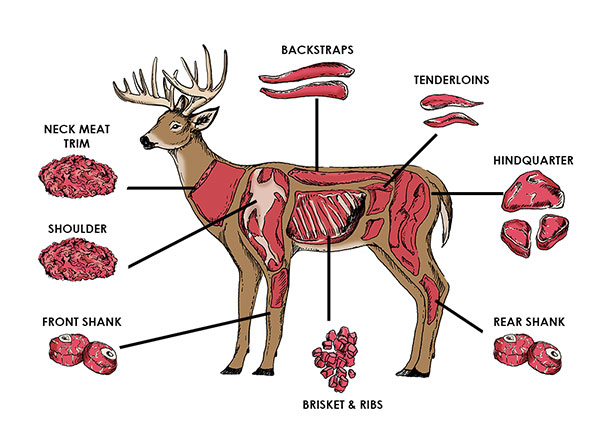 If you are struggling for survival, food is a major priority. It keeps you sharp, maintains your strength, and gives you a huge boost in morale. The ultimate goal is to find animal protein by fishing, hunting, or trapping. However, it is vital that you know what to do with the animal once you have taken it.

Animals can start to spoil within a few hours if they are not properly cleaned. Then it must be butchered before being cooked or preserved. It’s important to know what parts of the animal are safe to eat and what parts could kill you. You also need to know how to use every piece of an animal to maximize your survival opportunity.

While this article will be focused on cleaning and butchering game in survival scenarios, it’s also valid information for the normal hunter, trapper, or fisherman. I can’t tell you how many people I know that have needed me to do the dressing and butchering after a kill.

My father taught me how to hunt when I was just a child. Recently, I taught him how to butcher an animal. Up until that point he had taken his meat to a processing plant and paid hundreds of dollars to turn it into jerky and sausage. It’s always a good idea to become more self-reliant even if you aren’t in a survival scenario.

Also, a lot of hunters don’t use as much of the animal as they could or should. I have seen hunters take the choice parts of a deer and leave the rest to rot. Part of the reason the buffalo almost became extinct is because hunters would shoot dozens of them then only take the easiest parts to access, the hump and tongue.

There is so much good meat on any animal if you know what to look for and how to cook it. With a little knowledge, you can make the most of every animal you take.

There are some parts of the cleaning process that should be done as soon as possible. This is to prevent the internal organs from tainting the rest of the meat. Field dressing doesn’t have to be done the minute the animal is shot. If you kill a larger animal, there is plenty of time to go pick up a friend before you dress the animal.

However, keep in mind that the warmer the air temperature is, the sooner you need to get the animal gutted. Just get to it as soon as you can.

The gutting process is the same for just about any land animal. Take your knife and start between the legs of the animal. I like to go ahead and cut out the privates with a V cut. I then use that to carefully open up the abdominal cavity. Cut through the hide and membranes without cutting into any of the internal organs.

Make a straight incision all the way up to the sternum. I also typically will cut through the sternum to the base of the neck so it’s easier to open up the ribcage. The only difference for birds is that you don’t want to damage the breast meat. It’s best to open up a bird between the legs just like a Thanksgiving turkey.

Remove the internal organs next. For small game you can often just rip everything out with your hand. Be sure to set aside the guts in order to save the ones you want to keep.

For big game you will need to cut out the internal organs. This works best with one person holding open the ribcage and another doing the gutting. I typically will reach for connective tissue with my left hand and do the cutting with my right.

Be very careful not to cut yourself as you won’t be able to see either of your hands. Your goal is to cut away all of the connective tissue so that the internal organs are loose and fall to the base of the cavity. If you are doing this with a hanging animal, they will fall to the ground. If the animal is on the ground, you will need to roll it to dump out the organs. Take a quick look to be sure you got everything cleaned out.

Internal organs are some of the most commonly wasted cuts. I suggest you try each one before making a decision on what to keep and what to discard. The heart is one of my favorite parts of the animal. My wife and four year old son start asking me to fix heart the moment I take a deer.

Deer liver has a similar texture to beef liver, so it can be good with onions. The kidneys are edible as well. Some people eat the lungs, stomach, and intestines although I choose not to for safety reasons.

Removing the hide from small game is fairly easy. I normally twist off the head first to create an opening in the hide. I cut down the front legs a bit. Then break the legs a little up from the paws and cut through to remove them.

I grip the rib cage with my left hand and the hide with my right then peel it down to the bottom legs. Once the hide is down to the back paws, break those legs and cut through to remove it entirely.

With squirrels it is sometimes easier to cut up the front and back legs, step on the tail, then pull the animal from the hide. In survival situations you should save the hides to act as mittens, hats, or bedding. You can even eat the bones of smaller animals if you are starving. 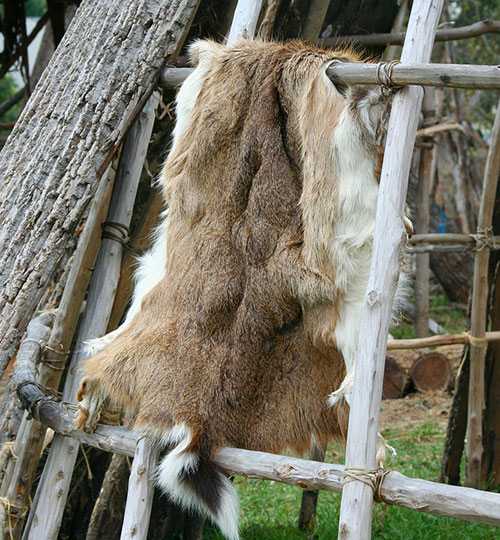 For large game it’s best to hang the animal from its neck or horns and raise it up off of the ground. Start by cutting a slit in the hide around the neck. Hold the hide in your left hand while using the knife in your right hand to cut between the hide and the meat.

Pull down and away as you carefully cut the hide from the animal. Work your way around from one side to the other. Once you get a few inches of hide loose, grip it with both hands and pull down with your body weight to strip it from the animal.

When you get to the front legs, treat them similarly to small game. Cut a slit down the leg to the first joint. Instead of breaking the leg, use the point of your knife to cut the tendons and ligaments of the joint to pull the lower leg free.

Then strip the hide away from the upper leg and remove from the torso. When you get to the hind legs, treat them the same way as the front. Slice to the joint, cut the tendons and ligaments, remove the lower leg, and strip the hide loose.

Now you should be able to remove the hide completely. Large hides are great for clothing, shelters, bedding, bags, or a dozen other functions.

In cold weather, it’s best to let large game hang before quartering the animal. This allows the muscles to firm up and the blood to retract back into the meat. It also tenderizes the meat. People will hang animals for anywhere from overnight to 10 days depending on how soon they need the meat.

At this point, the process of quartering an animal is largely the same for large and small game. In survival scenarios it’s best to just spread small game on a spit and cook over a fire versus quartering them.

Start with the front legs to strip the meat off of the spine of your animal. You will need to follow the edges of the muscle groups and cut into the shoulder joint on both of the front legs. Then cut the tendons and ligaments to remove the entire front leg and shoulder in one piece.

Do exactly the same for the back legs, cutting in at the tailbone and working to the hip joint. Remove the back legs whole and set them aside. Next, carefully remove the tenderloins on either side of the spine. Cut in at the top of the spine and strip them off down to the ribcage. This tube of meat is several feet long and a few inches in diameter on large game. You can reach into the ribcage and do the same for the back straps, but they are much smaller. 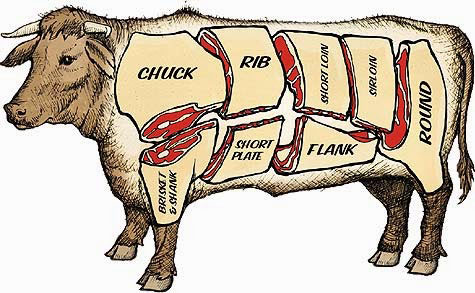 The remaining cuts of meat are often discarded, but shouldn’t be. Your next step is to remove the flank steaks. These are the flaps of meat remaining below the ribcage. Cut along the spine and up to the lowest rib.

Then remove the neck roasts. Start cutting just above the front shoulder along the spine and to the windpipe, stripping off all of the meat as you go. Take down the animal and use either a saw or pruning shears to cut the ribs loose from the spine. If you only have a knife, carefully cut all of the meat out from between the ribs. 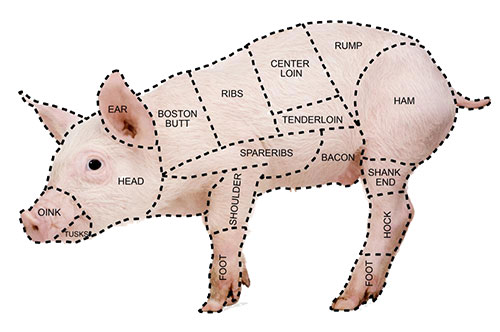 Finally, cut a V shape underneath the jaw right along the inside of the bone. You will need to make this cut deep in order to get the tongue loose. Cut until you can pull it out through the bottom of the jaw, then cut it off at the base. You have now removed all the meat from the animal.

On large game, butchering can be quite important. First remove meat by the muscle group. A great example for this is the rear legs or hamstrings. You will notice white outlines showing the gaps between the muscle groups.

Carefully cut along these lines to where you can reach in and pull the muscle groups apart. Cut down to the bone and strip the meat away. Then cut the tendons at the end of the muscle groups so they can be removed and set aside.

Organ meat will spoil the fastest, so eat it first if possible.

Cleaning, skinning, quartering, and butchering meat takes some practice. If you want to be proficient during a survival situation, I suggest you work on some animals in advance. If you don’t hunt, ask to help with friends that do.

The first time I butchered a deer it took me all day. Now I can do one in a few hours.

The good news is that the anatomy of most mammals is very similar. Processing a squirrel is similar to processing an elk. Be sure to keep in mind these important philosophies of processing animals:

In a survival scenario, this animal died to save your life. Treat it with the respect that it deserves.