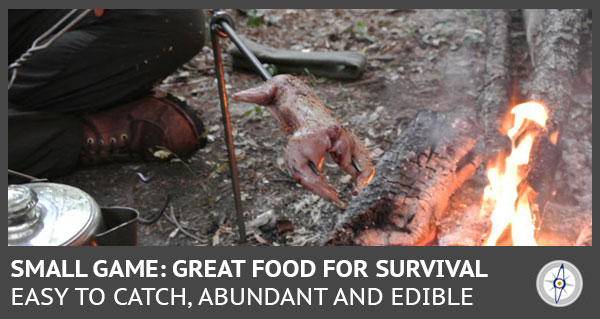 Although modern hunters and anglers often harvest large animals, and many primitive cultures fed themselves with buffalo, whales or elk, large prey is rarely the wisest target in short-term survival situations.

Not only are large animals hard to find, they are usually equipped with senses or abilities that will make them extraordinarily difficult to approach. You’ll need a very robust weapon to complete the task, and they may injure you during the process.

By contrast, small game is typically plentiful and often easier to catch. Obviously, small game doesn’t provide the same amount of food as large game does, but it still makes more sense for short term situations.

You may hunt pigs for a week before you finally figure out how to get through the process, and you’ll have nothing to nourish yourself in the meantime. But by focusing on small game, you can keep yourself going; the squirrel you eat today will give you the energy to hunt for another one tomorrow. 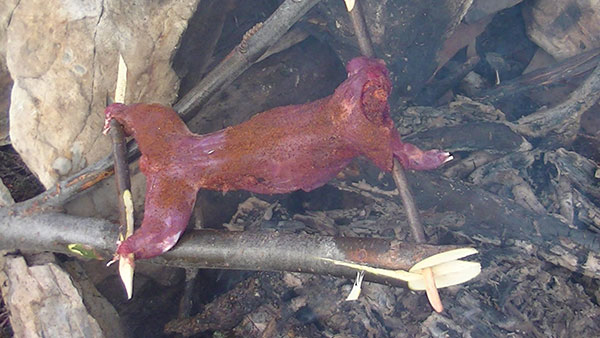 Squirrel cooking over an open fire

Small game is also much easier to trap than large game. And because you can set up multiple traps, which will work without your immediate attention, they greatly increase your ability to find enough food.

Different authorities define small game in various ways, but for our purposes, we mean anything small, abundant and edible. Some of the most important species and categories include the following:

Squirrels are quite common in many areas, although many people are surprised to see that true wilderness areas often support smaller populations than urban and suburban parks do. Nevertheless, they make an excellent food source, and can often be trapped by constructing a “squirrel pole,” although they can also be hunted. With some stealth, you can surely sneak into rock- or stick-throwing range.

To make a squirrel pole, you’ll need to make several nooses from stiff snare wire. Tie the free end of these nooses to a long stick placed diagonally in a place that squirrels are likely to travel. Be sure that the nooses radiate from the stick in every conceivable direction, to improve your odds.

While most people would rather go hungry than eat a rodent, we’d be remiss if we didn’t include rats and mice among the list of best small game animals for survival situations. You’ll find more rats and mice than just about any other vertebrate in most habitats, and they are generally easy to trap (figure-four traps are one of the best choices).

You will, however, want to be very careful whenever interacting with rodents, as they can transmit a number of diseases to humans. Always be sure to wash your hands thoroughly after handling rodents and ensure that they are completely cooked before consuming them.

Most songbirds are too small to be worth the effort of hunting them, and they are rarely easy to trap either. But large ground-dwelling birds, such as pigeons or doves, are often well-worth the effort. You can try to lie in wait for these birds at a watering hole and throw sticks, spears or rocks at them, but it is probably more effective to use a small cage-style trap. 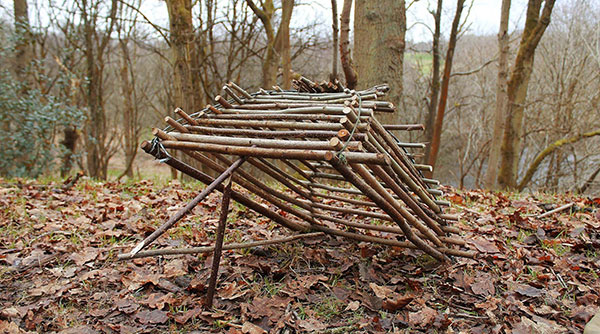 To build a cage trap, you’ll need to build a small cage out of sticks and cordage, and then prop up one side of the cage. Rig up a trigger to pull the prop stick free when the bird bumps into it. Use locally abundant fruit or seeds to help lure the birds under the trap and increase your success rate.

Wild waterfowl are much more skittish than the domestic or feral ducks living at your local pond, but they can still prove a valuable food source in a survival situation. If you happen to find yourself near a lake or pond, you may even be able to track down nests full of delicious eggs, tucked into dense vegetation by the water’s edge. 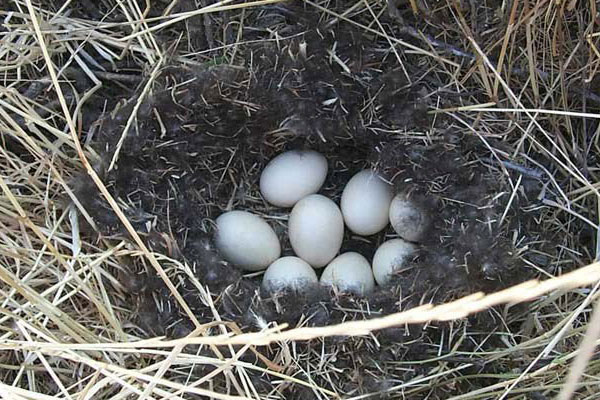 A tasty supply of duck eggs

The best way to capture or kill a water bird in a primitive situation is by making a foot- or neck-snare trap near the water’s edge. However, you may be able to hide in nearby trees or bushes and hit them with rocks or improvised spears.

Although many people would prefer to avoid seeing snakes in a survival situation, they represent a valuable and under appreciated food source. Water snakes can often be spotted by scanning the water’s edge, while rat and king snakes can often be found by flipping flat rocks and tearing apart decaying tree logs.

Because some snakes are dangerous, it is wise to use a very long, multi-pronged spear to catch them with. Dispatch the animal as quickly as possible by decapitating it after you’ve pinned it with the spear. Continue to use caution though: Snakes have been known to bite for several hours after death.

Aquatic turtles are an often-overlooked food item that can often represent one of the best food sources around lakes and other aquatic environments. Water turtles are often skittish, so you’ll need to work hard to get within grasping distance, but if you aren’t afraid to chase them into the water, you’ll often have success.

You will need to use care when chasing after large turtles, as many can inflict nasty bites.

You may also have some success catching turtles by using a fish basket or simply baiting the water and then waiting in a good ambush position. Let the turtle begin to eat, and then jump out and grab him.

Frogs can make an excellent food source, especially for those finding themselves in the deep south. Several edible species – including bullfrogs, green frogs and leopard frogs – often achieve extremely high population densities near ponds, lakes and swamps. Unfortunately, these frogs will be most active at night, but they can be captured during the day if you do not have a flashlight. 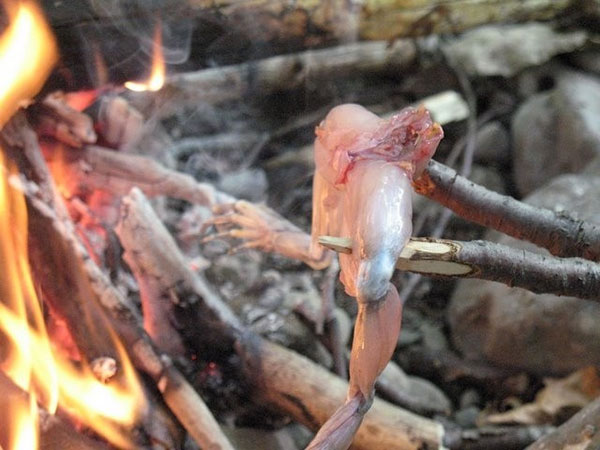 To catch frogs for eating, you can use your hands or a long, multi-pronged spear or gig. It takes a bit of practice to spear frogs consistently, but because they are often so numerous and clustered, you’ll quickly improve your frog-gigging skills.

As you can see, most habitats are overflowing with small animals that can help sustain you through a survival situation. You are much more likely to succeed in hunting or trapping small game than large animals, so make them your primary target.

How to Build Primitive Traps

The Reality of Foraging